September 02, 2012
Wow, a direct continuation !!! Previously I talked about on suggestion to start a better heroes universe and also talking about Comikrew Heroes Universe (CHU). This time I'm still hoping suggestion from you all but at the same time, I'll introduce to you the characters that will be appeared in CHU so that they might give you some idea on what to suggest.

However before you start to read and gives comment, it is better to read 'to build a better universe part one'  so that you get to know a little bit on my stand about all this superheroes stuff. So lets begin !! 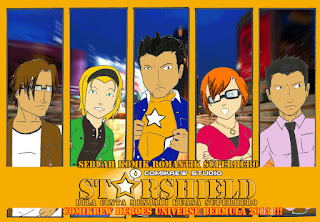 I'll start with the first comic that will open the universe of CHU; Starshield. Here is the teaser poster for Starshield which is a romantical superhero comic. That is something that we don't heard a lot on Superheroes comic, is it?


Starshield
His real name is Dave Drake, a lecturer in Hero's Academy and a very well-known superhero of Star City (fictional city that I created from Bukit Bintang). He who is also a student from the academy and even a protege of the academy principal itself possessed a super-strength ability and able to fly. His own emotion is his main weaknesses.

The Wanderer
His real name is Ben Carter, a student who once studied in Hero's Academy but was kicked out because he didn't possessed any superpower. He resumed his studies at UTP before decided to protect Lumut City from corrupted people as The Wanderer with the help of one of the police officer there. He fight by using gadget and devices that he created after he read about a story of a superhero who fight the same way in Malaysia.

MoonLight
His real name is Alex Crimson Jr., the son of Alex Crimson Sr.; the previous MoonLight who previously protect NeoTown (fictional city I created from Kota Bharu) before he turned paralysed. Alex is a reckless and arrogant boy coming home from overseas to continue his father legacy in NanoTech. He then realised that NanoTech responsible of his father condition and decided to take his father's alter-ego. MoonLight fight with gadget and Devices but Alex's body is also enhanced with NanoDroid.

The Hero
His real name is Frederick J. Christopher; a British guy who came here and started the Hero's Academy in Putrajaya. He believed that the fate of the nation cannot be given to some ordinary people. He is currently one of the most influential men in Malaysia in how to protect this nation. He possessed a telekinetic ability along with his super-strength and the ability to fly

Stickerman
Jared Jungah who was once a policeman in the city of Johor Bharu turns into a superhero when he meets into an accident inside a Glue company. He works as a part-time photographer after the accident and at the same time hold the identity of Stickerman. As his name explain, Stickerman able to stick on the wall but he can't stand to much heat.

BikeGirl
Kamala Krisna is a policewomen at Alor Setar and thinks that the police is unable to cope with the criminal around there. She finally decided to help the cop by becoming BikeGirl. She usually come with a bike and set of gun to fight (like a cop). However, most of the time her help is now well-received by the police.

NightMoth
Azandra Suhaili is a prostitute who lives around Kajang. When her best friend was murdered and the police seems like didn't do anything about it, she creates an alter-ego known as NightMoth to hunt this killer. Seduction is her main weapon but tough guy is her main weaknesses.

Raigaman
Nicky Chua is the CEO of Flash Electrical Company in Kuala Terengganu. When he realized that his company is being sabotaged by his rival, he decided to protect his own interest by becoming Raigaman. Raigaman is equipped with gadgets to produce lightning from the electrical power and he also able to run in the speed of lightning.


So. there we goes, all the superheroes that will be a part of CHU. What do you think about their profile? Sound out your thought in the comment section below and wait for the arrival of the reaser poster !!!Chiaoo !!!