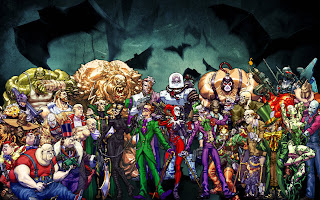 So, hi we meet again in another post of Comikrew Studio. Today I'm gonna sort of discuss something that I think ( I don't know what you think, but oh well it is my blog after all...) pretty interesting; Patterned Villain. No, I will not talk about some massive issue of patent or copyright but about HOW VILLAIN FOR A CERTAIN STORY IS PATTERN FOLLOWING ITS MAIN CHARACTER.

So, lets start. We have been watching superhero movies, comics, animation and see how hero and villain fight each other and one of them sometimes die, which are resurrected after some time, or end up to be sent to the same place like in Batman. However, few of us actually realized that villains of all this superheroes have somehow been nicely pattern to suit the superheroes itself. Disagree? Well take a look at this.

Iron Man
Iron Man's villain will always revolve around either his suit, his glowing chest plate, or simply the technology itself. In Iron Man, we have Justin Hammer; Stark's rival in his industry (which is technology) .Then Obadiah Stane and his son who both are inventors and want Stark's suit (Technology),Crimson Dynamo and Whiplash (Both use technology to fight), and Mandarin (use alien TECHNOLOGY to fight Iron Man ).

Batman
Batman's villain is some sort of people who does not satisfied with the system existed particularly in Gotham itself. We have eco-terrorist who constantly said thar Gotham is polluted and need to undergo cleaning (Ra's Al Ghul, Bane, Poison Ivy) or someone who think good and evil here are not rightly defended (Two-Face, Mr.Freeze), and they just simply hate Batman and the thing exist with him (Joker and The Riddler). Catwoman is an exception because she was created to dismiss the rumor of Batman and Robin are gay.

Spiderman
Well, this one has the most interesting pattern because Spiderman's enemy usually created from some sort of accident by their own mistake. Let see we have Doctor Octopus, The Lizard, Both Green Goblin (Norman and Harry Osborn), Sandman, Electro, Morbius, and don't forget Venom himself. Like how Peter become Spiderman because his own mistake (Uncle Ben died indirectly because of him) so do how his enemy existed.

So, I think these four examples are good enough to open your mind and think about it, the truth of the presence of pattern in villain for superhero. If you think this is not good enough, think about Captain America, Fantastic Four, Ghost Rider, Punisher, I can't think examples from DC much. You will realized their enemies were also in pattern. So what do you think about it? Agree? Disagree? Agree to Disagree? Sound your thought at the comment section.
CERITA AKU Comic Book Movie KOMIK MANGANIME REPEKAN