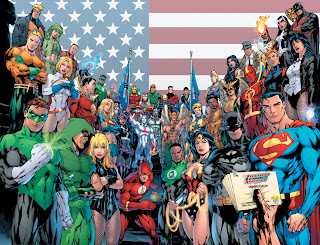 So, here we are again in another post of Comikrew Studio. Today, I'm not gonna touch on anything about CHU but yet I still gonna touch about superhero which is about how a small features that exist on the superhero but yet it become the moment of "That is so true !!!" when you thought about it.

1. Superhero just don't catch a cold
Batman's backbone was snapped by Bane and recovered. Captain America died and resurrected. Iron Man suffered of brain tumour and cancer but survived. Prof. Xavier was paralyzed but able to walk again later. They suffered so many pain in fact extreme pain but they never catch a simple cold. I mena, have you ever read in any of this comic book where the hero catch a cold due to be outside during rain for too long? Nope? In fact, most of them just don't get enough sleep and they're just feeling sleepy or sloppy but never get ill ( catch a cold to be specific). Well then, I guess they just have a strong antibody towards cold but not toward other sickness.
2. Superhero really like rhythmic name
When this superhero become their true human identity. They tend to have name that so rhythmic like Peter Parker, Matt Murdock, Stephen Strange, Clark Kent, Bruce Banner (DC don't have a lot but Marvel does) and don't forget Scott Summers. I guess this rhythmic names are nice to be heard and maybe it is to remember too (Well, you keep changing your identity, you would need to have an easy name to remember).
3. This will always be my face
You might actually notice of this, superhero just don't change throughout the time. Batman never had a beard, maybe he had but he will shave it first before becoming a batman. Just like in TDKR where Bruce Wayne had time to get s clean shave before went back to Gotham to save it.  Green Arrow on the other hand has beard on his face and yeah,.. it never become larger or 'furrier'... I guess all this heroes have their own make up artist.
4. Two is definitely better than one
When you think about it, superheroes always have this kind of second hottie that usually someone who wear mask like them other their non-superhero identity. Batman has Talia and Catwoman, Spiderman has Black Cat and MJ Watson, Daredevil has his Assistant Attorney and Elektra. Even Superman now has Lois Lane and Wonder Woman (yes, Clark Kent has an affair with Wonder Woman). So, it is a compulsory thing for you to have at least two GF to become a superhero? I don't know...
5. Never heard of you before but whatever... Lets form a team !!
This is something that might does not apply to the world of comic book right now but still don't you feel weird when superhero who protect all this town but never know the other in fact other superhero in their world? It feel like they never read newspaper at all (that sound so bad on Clark Kent and Peter Parker). And then they suddenly meet each other and form a team without asking why I never ever heard of you before...

So here you go, some I think some things that typically happen in superheroes world but we never care. So what do you think about it? Are you agree with me? Did I miss anything else? Well, sound it all on the comment section !!!
About Superheroes CERITA AKU Comic Book Movie INFO KOMIK REPEKAN