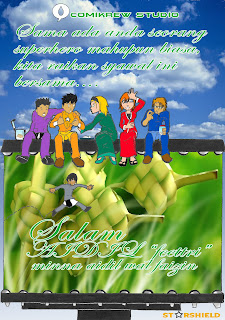 Hullo everyone !!! So, first and foremost happy eid mubarak to everyone !!! Well, I know it is quite late so yeah happy belated eid mubarak !!! Btw, here is a poster from Comikrew Studio for Hari Raya !!!   So as tease, Comikrew's this year raya poster hold the theme of Superhero which also teases everyone on our upcoming superhero project for Comikrew Heroes Universe. We get back to that later as for this post is all about teasing you'll with our new and upcoming comics for CHU. What is this CHU? Well you can refer CHU here .So in that post we did told you all on several comic that will make up this new universe. In the next post I'll try to make something in building CHU. So hopefully is ready to for it. Chiao !!!
Post a Comment
Keep reading

Hello guys !! My topic today is Anti-cliche. Why suddenly I would like to talk about this? In the recent event of our movie-world, we've seen Nolan try to break the trilogy curse through his The Dark Knight Rises, you can check my review on the movie here , which I believe he was slightly fail to do so.  One the reason which I believe why he fail is how he build up he last scene which to similar to Transformers 3 and The Avengers which is a cliche way to create a movie blockbuster, isn't it?      So, why being anti-cliche is so important? Because it make your work special and remembered by everyone because it is one of a kind. Nolan is actually famous in his work that is anti-cliche; remember inception, and The Dark Knight? Nolan takes on both of the movie were so remembered because his plot and storyline was one of a kind.      However, most people think that it is better to follow a known formula in this life. For example, most movie producer in Malaysia, sorry to say,
Post a Comment
Keep reading

Now, Comikrew Studio's blog has been in problem for quite some time and today as the problem ended, it is also the best time to announce newest series of Comikrew Studio which is Comikrew Heroes Universe (CHU). Sounds like the Marvel Universe, right? Almost similar but CHU will focus on an entirely different thing.       I'm sure some is quite familiar with National Crisis comic which I've been posting the teaser poster for the tie-in recently, National Crisis will be a part of this CHU and will marked the beginning of CHU itself.  After the end of Segi Tiga Cinta, a lot of discussion has been done to determine the future of Comikrew Studio. With the trend of Superhero Comics are becoming more popular and popular among the fan, we decided to set up our own superhero universe through CHU.      However, unlike what you see in Marvel and DC, CHU will put a definite differences between heroes and superheroes. In CHU, the towns and cities in Malaysia are protected by wh
1 comment
Keep reading
More posts