Fairy Tail finally followed the other two giant manga; Naruto and Bleach reaching its final chapter yesterday. With Bleach being baffling and disappointing and Naruto being okay and uplifting, which end does Fairy Tail went for its conclusion ? And does it provides the satisfaction to the reader ? Hit the jump to find out. FULL SPOILER FOR THE SERIES

The announcement of Fairy Tail's ending came with a countdown, and with the Alvarez Arc reaching its end, it is quite obvious that the final battle between Acnologia and the Mages is coming. The final battles kicks off on two ends. In the real world, the mages are fighting against the dragon form of Acnologia while the dragon slayers are fighting the human form in another plane. 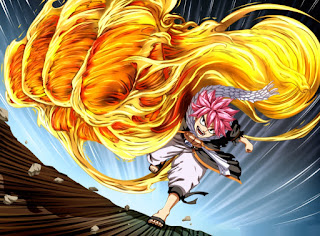 The battle ended in a Dragon Ball style, with the world unites to use Fairy Sphere to trap the Dragon King, and Natsu delivers the final blow with a united power of the Dragon Slayers. The final chapter time jumps a year later with the guild reestablish and Lucy continues on another adventures with Fairy Tail.

The ending of the manga went with a more uplifting as expected for a shounen title. Not that I want a dark and grim ending, but even during the Alvarez arc, we had a death fake-out in every chapter and it is clear that the author got too attached to the character. Heck, by the end of the series, we didn't lose even one of the character from the good side. Even Mavis returns as a reincarnated version of hers. Wars is hideous and while readers always prefer an uplifting ending, something need to be shown as the consequences of going to war, and Fairy Tail totally lack of this consequences.

The author however tried to run away of the trope every character got together and married, as only Levy and Gajeel the only confirmed one becoming a couple. The rest of the main characters were just given a hint and a wink, that however, most probably because the chapter ends with them went for a journey and its hard to do so when everybody found love (case in point; Sakura and Sasuke).

Overall, Fairy Tail is a decent enough ending for the series. Up until now, I still consider FMA's ending as the best (do note that I do read as many manga), and this is far less than that, but it is enjoyable nonetheless. While there's hint there could be continuation, but it is very unlikely. In the end, I gave Fairy Tail chapter 545 ad 3.0 out 5.0. A decent ending, but lack of consequences considering what happened leading to it. Overall, I gave the series a 4.0 out 5.0. The series ended as what the author wants, but it lean to much to its fan (pretty obvious considering the fan service and death fake out).

What do you think of the final chapter of Fairy Tail ? And the series overall ? Sound off your thought in the comment section. Stay tuned for a possible prologue for The Promise later this week by following Comikrew Studio right here or on Facebook. Don't forget to subscribe to my comic on Tapastic and finally follow and hit me on Twitter.
COMIKREW Comikrew Reviews KOMIK MANGANIME SENI