December continues my effort to win Malaysia Online Comic Challenge, and marks the end of Skuad Satria. Hit the jump to see what to expect this December with Comikrew Studio.


First off, the vote period for Most Popular Comic award in Malaysia Online Comic Challenge continues until 5th December, so remember to keep voting my comic (and the other you enjoyed) as you see worthy.
Chronicle intermission chapter continues with part 5 and part 6. Nia decided to team up with Dante to face up the Desert Pirate in a rather interesting chapter.

Chronicle #27 : Intermission part 5 (2nd December, 2015)
Chronicle #28 : Intermission part 6 (30th December, 2015)
Skuad Satria will have three back to back chapter as the series reach the end of its run. The recently delayed issue will be released followed by the origin of Hackerdroid reaches its finale with a Hackerdroid and Virus face off. Also, a special epilogue for its very final issue. 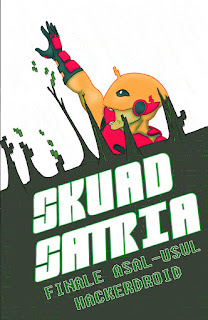 Skuad Satria #17
Skuad Satria #18
What do you think of the line up for December ? Sound off your thought in the comment section. Of course, there will be others thing line up for December like the annual Comic Book A-Z, so stay tuned for all of that as well. Be sure to like Comikrew Studio on Facebook, Subscribe to my comic on Tapastic, and follow me on Twitter. Finally be sure to always follow me right here on Comikrew Studio
About Superheroes Chronicle COMIKREW Comikrew Heroes Universe comikrew love story KOMIK Skuad Satria