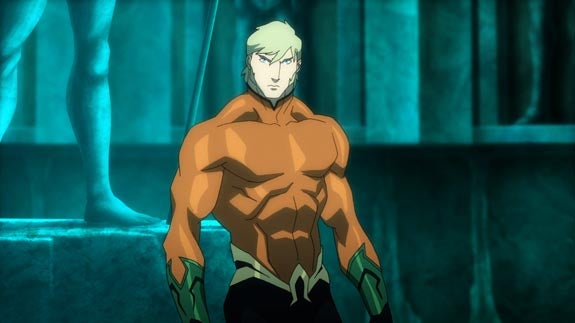 Aquaman is finally jumping into the DC Animated Universe with his own features Justice League Throne of Atlantis. Did this movie manage to raise his reputation as the king of the seven seas ? Hit the jump to find out.


For this review, I'll change the format a little bit. We'll focus on non-spoiler first and the spoiler at the end. I'll marked where the spoiler started. So ready ? Lets jump into the movie. Honestly, this is the weaker movie compared to any other DC animated movies. While there is a great moments, overall the writing was poor. I was really looking forward to this movie because the comic book version is one of my favorite storyline in New 52, great in both story and art. Shockingly, the movie is seemingly de'marvel'fied with weak villain and wise-cracking one liner superheroes .

Lets talk about writing, as I said earlier, the writer seemingly tried to follow Marvel formula but fail spectacularly. I'll talk more about it in the spoiler section, but they clearly didn't understand Batman, Ocean Master, and unfortunately Aquaman himself. Some moment are great, the Clark Kent, Lois Lane, Wonder Woman moment is one of the highlight. There is some great development with Cyborg. Also, a movie inspired from a comic book that didn't featured The Flash, he had a lot of screen time. Is it because the love writing The Flash or because he is a big star right now (both in comic and TV).

In term of voice talent, Andrea Romano drop the ball big times. The voice of Ocean Master was so annoying, you hate him at every level. Again as I said earlier, the villain is so poor in writing. Jason O'Mara is becoming more comfortable with his voice as Batman. Nathan Fillion is crushing it with Green Lantern as well as Shemar Moore and Sean Astin as Cyborg and Shazam respectively.

Animation wise, the fighting scenes were really good. They seemingly manage to balance the mix of 2d and 3d. Atlantis was fine, you don't see too much details on it. I would say the art is no where near Ivan Reis art for the comic book but it was good enough. I do have one complaint but I talked more in the spoiler section.

So after this is the spoiler section. If you haven't watch it, you might want to skip. But come back and join the discussion. So pass this, you are in for the spoiler.

As I mentioned earlier the overall story was really weak. The original story in the comic book was pretty complex because both Aquaman and Ocean Master are being used by someone else. Ocean Master was pretty a victim of circumstances of the whole thing making him more sympathetic and also he loves Aquaman very much. In the movie, he is a one-dimensional villain who hate everyone on the land and he was the one who attacked Atlantis and kill Aquaman's mom just to brought war. You immediately lost any sympathy to him and don't care anymore. Also, it's not like you can't follow the comic book route because you have Black Manta. He could be the one who use Ocean Master and again making him a victim of circumstances. 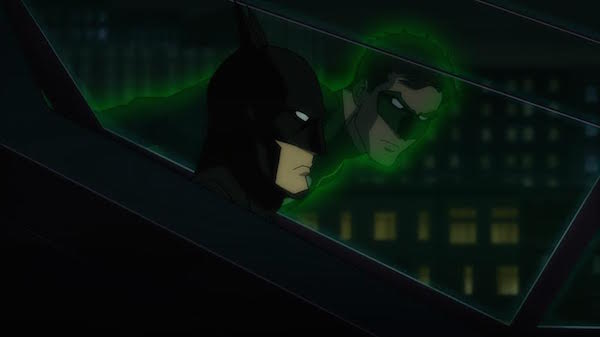 Oh my God, where do I start with Batman. I know that there's been a complaint of his detective skills being pushed aside since the Nolan Trilogy but he literally did nothing that doing some detective in this movie. You know someone didn't know how to write Batman when he barely in action. Heck,even in his opening scene at Gotham, he barely do anything. It is good that the writers want to establish his detective skills, but taking him out from the action, is not a good choice.

Now, Aquaman becomes one of DC most successful reboot in New52 recently. What made him so interesting is that he is this serious character that being made fooled of by everyone else. There is one panel in the comic book that define Aquaman as a whole.It is when he took the trident from Ocean Master, and just yell, "I am your king !!". That is Aquaman.

However, the writer decided to made him a wise-cracking one line king. The moment he spurred a one liner in the animated movies, I was like nope. Not, this one. The movie has enough people to crack joke. Green Lantern is crushing it with Nathan Fillion. You also have fast-talker Flash and buddy cop banter Shazam and Cyborg. That's three people. I understand this is his origin, so you can't establish immediately that other people making fun at him, but you don't have to. Again, the panel above just enough to define who Aquaman is. So I have a complaint with the animation, which is the tsunami scene. The best part of Throne of Atlantis (the comic book), is the tsunami scene and the whole storyline happens with water everywhere. Made sense, we talking about Atlantean here. However, in the movie, the waves go high and just stop. The tsunami never happen, the land was dry throughout the movie, and I was utterly disappointed. If you don't want to put the tsunami in, you don't have to tease and build it up. The movie build up as it would be a big thing and just decided to let it not happen.

Overall it was a pretty weak movie. DC has done a very good job first, establishing a good animated features and second, introducing a very complex villain. This is a step back to both of that. I'd say watch Assault on Arkham, and then watch this one, you'll see how weak this movie is and why DC should go the dark and gritty way instead of family friendly Marvel.

I'll give this movie 2.5 out of 5.0. It has its moment but, poorly written story, poorly written villain, and disappointing  climax at the end. Read the comic, you enjoy that more.

So what do you think of Justice League Throne of Atlantis ? Do you enjoy it ? Sound off your thought in the comment section. Stay tuned for the last part of Between Art and Religion this Friday. Don't forget to like and subscribe to us at Facebook, Youtube, and Tapastic. Also, should I start a twitter account ? Tell that as well. Finally don't forget to follow us here at Comikrew Studio.