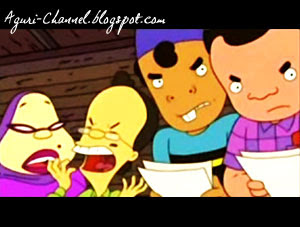 In my last article, I introduced to you all some of the famous Malaysia animated series. In this second part, I'll talked on the several reasons Malaysian animation died.

Last articles I gave a brief introduction on some of the famous slate of Malaysia animated series in the 90's, the trend continues until early 2000. In that time, some of the last series appeared are Frooties, one underrated animation known as Joned as well as short-lived Badang animation.

Now, what happened in the early 2000 that caused Malaysia animated died ? The several reasons that happened and this time I'll talked on the reasons.

The Rise of Dubbed Anime

On of the big reasons are the appearance of dubbed anime in Malaysia. Pre-2000, the only competitor of Malaysian animation is American animation. Batman : The Animated Series, Transformer, Spiderman: TAS, X-Men: TAS etc. which are all awesome series. However, these animations in English, hence couldn't compete much with animation presented in local language. In 1999, Dragon Ball was aired and dubbed into Malay. When a family-themed Malay language animation is pitted with an all-fighting, chi-firing Malay language animation, there is no where it can beat anime. This the lead to downfall Malaysia animation as more and more dubbed anime available.

Primetime and Rating issue
This is an indirect effect from the first reason as well. Because anime is enjoyable by a lot more range of ages (trust me, I watch Dragon Ball with my dad), the rating became a lot more higher, hence television network began to put more anime series on the primetime. Malaysia animations were then put in the slot where it really doesn't help to keep up the rating.

When Malaysia animation reach its peek, production company began to produce animated movie for theatrical release. The first one is the famously Silat Legenda followed with Putih and Budak Lapok. Unfortunately, all these movies failed to attract people to go and watch them at the cinema. This failure gives an impression that animation is not profitable business and began to affect Malaysia animation in a bigger way as more company decided to scrap any animation as it will not be as profitable as it before.

Formulated counter effect
In all animations, it is important to find the correct formula to ensure it keep being entertaining. This is the same thing as Malaysia animation . Usop Sontorian used a formula to focus on the life of the kids in the village. However, as time goes on this formula will become outdated because your audience grew up and they will feel that all the episodes became repetitive. Batman :TAS  used a formula to focus on Batman, Dick Grayson's Robin, and Batgirl. However as time goes on, the story left the formula and bring in Nightwing with a new Robin; Tim Drake. Keluang Man attempt to escape the formula by removing the asylum element from the series. Unfortunately, it become increasing boring as the comedic element radically disappear. When people got bored of this animation, they leave the series to find a new one and this cause animation to be cancelled later.

Clinging to one single animation
This is one reason that still applicable to even the recent Malaysia animated series. Production company tend to cling to only animated series and didn't have any plan if it got cancelled. While the producer Yookies did make more future animation after Yookies got cancelled, it end up used the same formula. This issue cause people to left the series before it even got started. To take an example, when Batman:TAS got cancelled, DC quickly produce a new one Superman:TAS which use a totally different formula. Production company must always be ready because sooner or later a series will get cancelled and with it does, something new must be released to keep fan's attention.

So do you agree that those are the reasons Malaysia animation died ? Sound off your thought in the comment section. Stay tuned for my third part next week and be sure to follow us at Comikrew Studio.