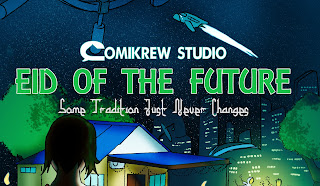 Ar per usual, Comikrew will be having its annual Ramadhan/Eid event. With a theme of 'Eid of the Future', this year the event will explore how some things never changes even in the future. Hit the jump to check out what to expect from this year event.

This year, the Ramadhan/Eid event is trying something different. The event this year consist of four individual one-shot similar to how Love Marathon was done last year. As mentioned in the first look preview, this is to give the reader some different feels as this year Love Marathon is a continuous story from Chronicle.

The one-shot will be released throughout Ramadhan and the first week of Syawal in both Malay and English on Mat Komik and Tapastic respectively. Two one-shot are set to released for Ramadhan; Best in the World and Sincerely for Money, exploring how our current lifestyle effects the our action in Ramadhan. The other two one-shot are set to released in Syawal; Musafir of Eid and The Traveller's Melody, both exploring a new perspective of people faraway from home celebrating Eid.

All the date shown is the release date for the English version, the Malay version will be announced when it is officially released on Mat Komik. 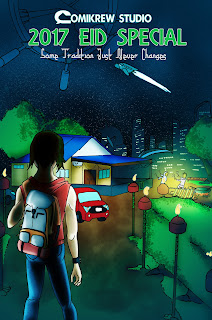 Best in the World (June 8th, 2017)
Sincerely for Money (June 15th, 2017)
Musafir of Eid ( June 22nd, 2017)
The Traveller's Melody ( June 29th, 2017)
Of course, Chronicle is on hiatus and will only back in August. In term of review, I'll be reviewing Wonder Woman next week and possibly Spiderman Homecoming in July. With Fairy Tail ending in nine weeks, expect me reviewing the finale as well.

Which of the one-shot you are excited the most ? Sound off your thought in the comment section. Stay tuned for my Wonder Woman review next week by following and liking Comikrew Studio right here or on Facebook. Don't forget to subscribe to my comic on Tapastic and finally follow and hit me up on Twitter.
COMIKREW comikrew love story Comikrew Reviews INFO ISLAM KOMIK Malaysiaku yg. tercinta one-shot RAYA SENI Special Event