The Avatar series finally ended with Friday's Korra series finale. What do I think of this considered controversial series finale ? Hit the jump to find out.


Legend of Korra is already considered a controversial series after being pulled off from the broadcast to online. As the series come to close, more and more revelation about the reason series being pulled from it airtime, it build up this reputation of how committed the series creator to the fan in making the series the one that fan deserved.


The finale of Korra kicked off with the final battle between Korra and her team against The Earth Empire lead by Kuvira at the Republic City. To me, the finale just show to all this superhero movies that keep destroying the city they are fighting in (The Avengers, Man of Steel, even Thor:The Dark World to an extent) and nobody seems to be died, that this is the right way to do the last battle. I agree on one review that tell that the reason why this type battle look acceptable is because this is the end of the series. All the superhero movies destroy a city in their first movies and this cause the movies become bigger and bigger and kind of look ridiculous. Also, they manage balance between destroying the city and saving the people moment.

In term of story, every character got a moment of shine. The close best is absolutely Mako attempt to destroy the spirit vine power source. The best one I'll get to it later. While the seems to be a lot of character and happening in the 1 hour finale, it still moves smoothly and not cramped. I also like the modern militaristic element in the story. The air nomad jumpsuit formation, wow just great 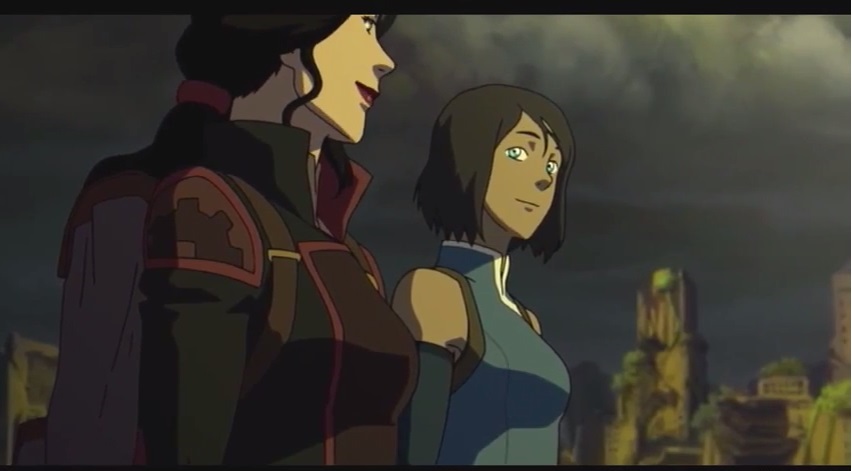 In term of ending, I feel like this one had more closure that  the previous installment. It is more probably that the creator know that the series will not returns in the future. Avatar: TLA brings up a question at the final episode and left you in cliffhanger. However, this series finale, you feel like that everyone got a good closure and there is no cliffhanger whatsoever. I do like how during the talk with Tenzin, Korra admit that she still have a lot to learn despite have save the world countless time. This is a step up from any other movies even to the series predecessor. At the end of LTA, Ang seem to be fully capable to be Avatar, at the end of Man of Steel, Superman seem to be fully confident of his ability, even at the end of Avengers, they fully confident to work as a team. To have a hero to admit that (s)he still have something to learn make him/her more human.

Now, lets talk about the best moment, the ending which is to me was a thought provoking one. People is now arguing if Korra is actually gay or did the creator just finally submit to the fan's pressure. First of all, the fact that the series is still shown online shows that this is a show for fan. You would not go online and watch it if you are not a fan. Is Korra gay ? It is up to you. Some review said that this is like Anna-Elsa relationship or Thelma and Louise. To me, she is still searching. I would agree with those other review just if the very last scene didn't happen. If they just walk to the portal holding hand, I would say yes, it's Anna-Elsa situation. But the fact that they are holding hand and looking at each other trigger a different meaning. Maybe not a couple but certainly more than a friend.

This ending also brought me to a point. Rumor has it that Korra was pulled off from its airtime because it was too adult for children. However, what do you expect, this people are 16 years old. Why are they find with Ang and Katara kissing in the previous series when they are just 12 and feel like this is too adult ? However, the fact that this series could go to this level of complexity and adult theme (sexuality, political, and ideology) online, could this mean more and more adult theme animation (manga-like animation) would be aired online ? I'm actually excited to see where this is going.

Was there any weakness ? There are some. I feel like the background out dropped the ball a little bit. Actually this happen throughout series. You can feel like the background is a little bit of out place. The revelation of Kuvira's motives of her action is pretty anti-climatic. I do agree that she should be just an all out villain. Sometimes villain does need to be sympathize. Zaher is a good example of this kind of villain and man, did he was terrifying in season 3. Action scene was good but I do feel like Korra and Kuvira could use more fighting scene during the end battle.

One major problem that I have with the series overall is how secure of the creator with their character. Literally no one from the known characters died. I thought Mako would died in that explosion scene especially after all that brotherly talk with Bolin but nope. It would be much much make sense of the title if Korra died. The series end but we never know why she is so 'legendary' ? I do think it would be a much better ending if someone just died. Sorry Asami's father, your death scene is sad but it is a cliche kind of sad and inconsequential.

Overall, I give the series finale 4.0 out 5.0. It is one of the best series finale I've ever seen but it was too obvious the creator love their character too much and that bother me. However, Legend of Korra is a great series overall and should be celebrated and remembered as one.

What do you think of Legend of Korra ? Do you like the series finale ? Do you like the series overall ? Did you think the ending was just a pure stunt ? Leave your thought in the comment section. Stay tuned for our 2014 recap starting next week. Don't forget to follow our Comikrew10 events and like us on Facebook . Lastly, keep following us here at Comikrew Studio !!
CERITA AKU Comikrew Reviews MANGANIME Special Event