Arrow closed its second season with a rather explosive and exciting finale. What do I think about this second season finale ? Hit the jump to find out.

Lets start with the story. While it doesn't feel rushed, I do feel that the first part is a little bit rushed in a usual CW way. The revelation of Oliver's identity as Arrow to Laurel does feel like it was done just to allow her to involve in the whole Oliver-Slade confrontation. I watched the first two part back to back and it feel much better watching it that way.

One thing that is nicely done is the set up of season three while the finale is going on. While the inclusion of ARGUS and League of Assassin make sense, I do feel like the inclusion of Deadshot is unnecessary. Also the twist in the finale is nicely done in my opinion. I do feel like either the director decided to cop out by making Felicity and Oliver in love without no reason or Oliver simply tried to protect Felicity to avoid Slade make her as sacrifice between her and Laurel. However, but the revelation is out of my mind and simply unexpected. Kudos to the director for that.

Action wise, it is amazing. Though the finale suddenly become a scene of arrow flying everywhere, I do feel it is done well. I also glad that other characters are given spotlight. I do wish I could see more Diggle vs Isabel, though. All in all, I still consider the action is top notch as always. The inclusion of Laurel in some of the action scene might hint that she will be closer to her role as Black Canary in the future and totally redeem her downfall throughout the season. Also the confrontation in ARGUS headquarter was brief but the moment Amanda used two guns is a good hint of her true skills. 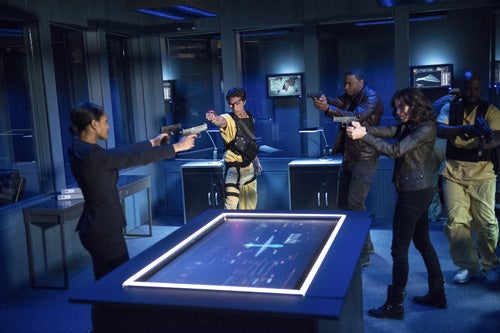 In term of ending, this one is done with a proper conclusion much better that season one. However, I do think that it is done because Arrow is confirmed for season three until this week. So the director decided to make it at least a proper ending if it is now renewed. Also, the endings are filled with a lot of build up for season three. For now, we know that Laurel is getting closer to her identity as Black Canary, We know that Roy WILL get a uniform for season three and I really, really hope the departure of Thea set her up as Chesire.

Overall, it is great finale for the season and I'm looking forward for season three. For this finale, I'll give 4.5 out of 5 because while it is a great finale, there is some part that feel a little bit rushed but it is a satisfying finale.

What do you think of Arrow season two finale ? Sound off your thought in the comment section. Stay tuned for more review from us and be sure to follow us at Comikrew Studio and don't forget to like us at Facebook.