It is the end of year and we are back to recap the biggest news happen in the comic book world. Hit the jump to see our A-Z choice.

A - Arrow Triumph
Arrow back for another season and keep getting as the story moves on. After the mid-season finale, a lot more things are to be expected as well more cameo will be coming to the series.

B- Batfleck
While the announcement of Batman vs Superman is a big news, a bigger news is the casting of Ben Affleck as the new Batman. Some people hate it and some other people feel more excited for this movie. Regardless, nothing is sure yet until the movie came out in 2015.

Phil Coulson back for Marvel's answer to DC's Arrow. Agent of SHIELD debut with the highest rating ever. However, the series was devastated after that. Many expected it would not be back for another season and maybe Marvel first misfire.

D- Death of Damian Wayne
Many argue is this the problem is with DC or Grant Marrison. The distance between Damian's death and Scott Snyder Death of The Family is too close. While he is still died in the DC Universe currently, there's rumor he'll be back next summer.

E - End of Ultimate Universe ?
After Age of Ultron, one of the biggest effect is the arrival of Galactus to the Marvel's Ultimate universe. Many thinks this will be the end of the universe that was once considered a great step taken by Marvel for alternate universe concept. The interesting part of the storyline is there has been a lot of talks that Miles Morales will survived and goes to 616 universe.

F - Forever Evil
After Trinity War, DC goes into their first cross-universe event. Currently in issue 4, it is still interesting to see villain step up as a hero to fight against a bigger villains in the story; Crime Syndicate.

After his appearance in Arrow as Barry Allen, Grant Gustin managed to gain fan trust to bring The Flash into the small screen. Many still wonder if he will appeared in DCCU, and worried as well as he is considered too young and incapable to stand side by side with Henry Cavill and Ben Affleck.

H - Homophobic ?
DC cause a big fuss when the writer of Batwoman leave under creative argument. Many accuse DC is being homophobic when they refuse to allow Batwoman's lesbian wedding scene to happen.

I - Infinity
Marvel finally gave up with Bendis and allow Hickman to create an cross universe. While the event itself  is great, it has problem that the ending was rushed and a little bit mediocre. However, the event is nonetheless is much better that Bendis' time travel bullshit.

J - Jim Carrey fiasco
Jim Carrey make a big news when he suddenly refuse to promote Kick Ass 2 under the reason to show his stands to against gun and violence. Fan said this news actually the reason why Kick-Ass 2 doesn't do well. As answer for DC's Simon Baz, Marvel came up with a new Miss Marvel as a muslim heroine; Kamala Khan. While it will be a while before this comic to debut, it will be focusing on the stereotypical view of the character  and she's dealing with her role as superhero.

L - Low Budget DC movies
Warner Bros is currently planning several low budget DC Comics movies. The problem is it will be written by David S Goyer that most people said the one who responsible for what's wrong with Man of Steel.  Movies on the list are Deathstroke and Suicide Squad.

M - Mandarin Twist
Marvel took a bold move to alter Iron Man's archenemy into some imposter. People commented that the trailers were  misleading and twist was hated at every level. Marvel is said to redeem the mistake through a Marvel short film.

N - Netflick for Marvel
Marvel is set to release 4 13-episode series and to be combine another series; The Defender. Four characters set to debut are Daredevil, Luke Cage, Iron Fist, and Jessica Jones.  While they are set to appear in the small screen, there is possibilities for them to go to the silver screen if there are demands.

O - Only two more movies
As Robert Downey Jr.'s contract ended with Iron Man 3, many wonder if he'll return for The Avengers 2. It was then announced that he only be back for another two Avenger's movie, hinting there will not be Iron Man movies for quite some time.

P - Paul Rudd is AntMan
As late announcement for this year, Paul Rudd has been announced that he will be AntMan. Set to be release on July 2015, it hasn't been announced which AntMan will he be though most believe he'll be Scott Lang. 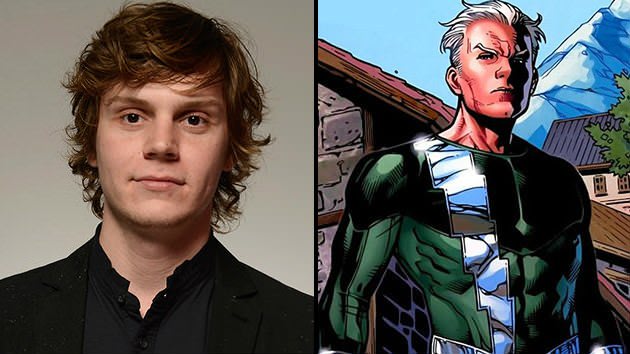 R - Rise of the Inhuman

Following the Infinity event, Marvel went to ANOTHER event which is Inhumanity. Not much is know yet, but many people this is hint that Marvel effort to make this race more well-known to public audience for Marvel Cinematic Universe.

S - Super Snapper
This is considered once of the polarizing comic book movie yet. Man of Steel shocked the audience with the Zod- neck snapper scene. Up until now the purist is still debating whether this is the right path for DC to start their cinematic universe.

T - Trinity War
The set-up of the Forever Evil, this event show the capability of Geoff John to conclude an event in six issues while brought in another event compared to some Marvel event which most of them now is only a set up event and left many question unsolved . However, the weakness is the artwork that is inconsistent and sometimes mediocre.

U - ULTRON
The shocking news of Comic Con is Ultron will be the main villain in the Avengers sequel. James Spader is cast for the character and is believed to be a part of motion capture. Thanos who was featured in the post credit scene in The Avengers is said to be pushed into the third installment.

V - Venom & Sinister Six
Sony tried to compete with Fox, Marvel, and DC by announcing a Venom and Sinister Six spin-off. It's believed that they will be head for Agent Venom instead of the old-Eddie Brock Venom. Sinister Six has hinted in the upcoming sequel but how it will goes for the spin-off yet to be known.

Gal Gadot is cast as Wonder Woman in the upcoming Man of Steel sequel. What is weird is Warner Bros didn't choice to go for twist for a surprise factor like Thanos appearance. Is this mean Warner Bros didn't confident for the upcoming sequel.Many still argue she is too thin for the character but it is not possible for she to bulked up for the character in the future.

X - X-Men: Apocalypse
Brian Singer tweet that the sequel for X-Men: DOFP will be X-Men:Apocalypse. However many thought the announcement is too early and remove the attention from DOFP. At the same time, this maybe an effort for Fox to brought out a big villain similar to Thanos for MCU and Darkseid for DCCU.

Y - Yet another Marvel NOW
Marvel announce that for next year they will go for another Marvel NOW initiatives, known as All New Marvel NOW. Several new comic has been announced and still the numbering is super confusing with 24. Now but with #1 on the of the page (refer to The Avengers issue).

Z - Zero Year
Scott Snyder blew everyone mind with his new take for Batman's origin. Currently on the second arc, it managed to capture the pre-Batman era perfectly with interesting easter egg and homage like the large coin and the birth of Joker.

So what do you think of the list ? Do you think there are more suitable events to replace the event that we chose for the letter. Sound off your thought in the comment section. Stay tuned with us for news in the future. Happy New Year and be sure to continue to follow us at Comikrew Studio in 2014 !!