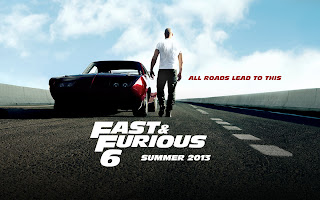 Last week, Fast and Furious 6 hit the theater and did this high speed franchise meet its fans expectation ? Hit the jump to find out but beware SPOILER!!

Call it what you want; Fast Six, Furious Six, or Fast and Furious Six. This franchise is one of the successful franchise without a need of reboot in the middle. So did the sequel continues to attract the movie-goer ? I'd say hell yeah !! Before I start my review, I'll give a little bit of synopsis of the story. The story take off after Fast Five where Dom is having a peaceful life after their last heist. However, Hobbs backs to haunt him with his past as he need Dom help to capture a group of highly skilled robbers and Letty who was believed to be dead in Fast Four (I'll used a simpler short form) is a part of it.

To be honest, as the movie start I was suspecting two things will happen; Gisele will died somewhere in the movie and Gina Carano's character was a double agent. The director kind of hinting the fate of Gisele since the beginning of the movie and surprisingly the moment she died, it was still a little bit sentimental for me. But I think it will be more touching and emotional if her death was the cause of Dom's team motivation to hunt Owen throughout the movie but I guess the director has it's won motive which I explained later in the review.

What makes this franchise special is a strong theme of family despite its focus on car racing and heist. To be honest it was more clear in this movie than Star Trek Into Darkness (STID). STID was more of friendship than family. Kudos to the director of this movie because manage to maintain to interest of the fan despite the story now has expand from a single Brian O Connor in Fast One to becoming a father and fans is still fine with it.

In term of performance, all the actors and actresses deliver a top notch performance. Vin Diesel and Paul Walker continue to show its strong relationship as the main protagonist in the movie. Tyrese Gibson continue to be the comedic relief and this time he's paired up with the The Rock for some of the humor which giving a more function to The Rock's character other than to build up the relationship between this law enforcer and the group of ex-criminal. Gina Carano as the new addition to the franchise was good in term of performance but I think she could be more than just as Michelle Rodriguez opponent in the movie. Other actor manage to maintain their performance but kudos to Sung Kang and Gal Gadot who manages to steal the show with their pair up as Han and Gisele.

Is there any weaknesses ? Unfortunately yeah. Justin Lin again used the "villain purposely getting caught formula without no reason" which are getting lousy by now. Also the twist in Gina Carano was being a double agent didn't have a strong effect to story as well. However, this weakness really didn't affect you enjoying the movie.

As the last movie for Justin Lin who has been directing it since Tokyo Drift, he had done a good job concluding and connecting the story from 2 Fast 2 Furious to Tokyo Drift as everything is concluded in this movie which is satisfying for all the fan who was waiting for this to happen. Also the mid-credit scene which connect the two movies and to hint the next installment was done so well it just pump up everyone to watch the next one which I believed will cover around Dom saving his family as someone close Owen is crossing the list of Dom's family. If it's true then it makes sense why Gisele's death was not made as the motivation of this movie as it will be just a redundant for the next movie.

Overall, Fast 6 was an awesome blend of action, humor, and emotion. I certainly enjoy it and recommend it to everyone. For that I give 4.5 star out of five for the movie. Had to minus for the weaknesses. What do you think of Fast 6? Does it continue to capture your interest or you just had enough with it? Sound off your thought at the comment section. Stay tuned with us for more movie review and don't forget to be a fan of Comikrew Studio !!
CINEMA.. CINEMA.. CINEMA Comikrew Reviews Movie-Freak Review Movie