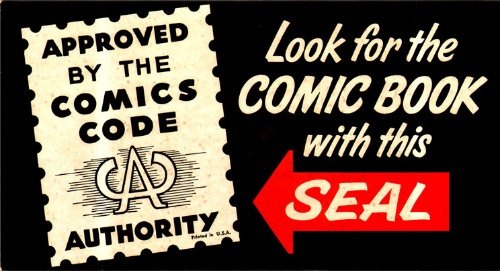 Recently, I commented on a national issue that involves name designation towards something in order to receive approval. In that comment , I mentioned 'Comic book Code Authority' which I noted as a reference I'm the only one who understand. So today, I will touch on it and how it relates to the national issue that I was commenting.


What is Comic Book Code Authority ?
Have you ever wonder why in Malaysia before KL Drift 2, or Puntianak Harum Sundal Malam, there's been a lack of negativity elements (good guys lost, bad guys win) or supernatural ? In my opinion this might indirectly cause by what was then known as Comic book Code Authority (CCA) , a written rule of how comic book should be depicted as a reading material for kids (even for those who aren't). CCA required every comic to not featured sexual imagery; whether it is explicit, implied or even seemingly implied; I get to this later, element of supernatural, gangsterism, or negativity of any sort. The origin started with a book written Fredric Wertham known as Seduction of the Innocent. This book mentioned that comic book have become the source of juvenile delinquency  to kids. The major example pulled for this stands was the depiction of Batman and Robin sleeping together may implied homosexual relationship and I guess at that time pedophilia (?). After a period of which comics almost been banned and burnt, CCA was established and comic publisher must sent their books to receive CCA seals for distribution.

The cencorship effects.
As soon as the cencorship take place, supernatural comic publishers are among those who effects as most of their comic did not receive the seal resulting them to went out of business.

In term of major comic book publisher, the code cause DC Comics to introduce the prankster Joker for Batman. It may also indirectly introduce to Catwoman as a way to solidify that Batman is not a gay man . Tough this proves to be a bigger problem as the writer has to come out a way to allow Catwoman to escape everytime as the code doesn't allow evil triumphs good at the end of every issue. Marvel Comics who at that time known to include mafia, and yakuza in their comic went around it by changing their name into the likes of Magia.

At the same time due to the code, more one shot issues are being published so every story depicts good triumph over evil as a story arc usually has to depicts the evil guy wins first.

The CCA become a major headache when a comic was being refused to given a seal due to the word 'Wolfman' on the cover despite it being the writer's actual name; Marv Wolfman. Few years later, a Spiderman book that touched the issue of drug was not given the seal as the code doesn't allow comic to depict anything that involve narcotics despite for a good cause. The Spiderman issue at that time was a collaboration with United States Department of Health, Education and Welfare. The issue was still published without the approval seal and become the one of many books that follows the suit later.

The dying moments
1980's become the moment when the code started to be defunct with more and more comic portraying heavier and even darker story. Watchmen at that time portrays explicit sexual acts. Death of the Family portrays bad guys win. Marvel by then has introduce Falcon, their first black superhero and Iron Man's Demon in the Bottle; their infamous alcoholic Iron Man's story arc.

2000's is when the code was rendered defunct with the appearance of mature label comic in the form of Vertigo which later introduced us to the drinking and cursing Constantine and MAX that brought us the popular Jessica Jones' Alias run that portrayed sexual assault. By 2001, Marvel decided to introduce their own rating which what we are more familiar now (T, T+,All Ages, and 18) in which DC Comics followed later in 2011 right before their New 52 reboot which by that time has showcased a lot of story that will not receive CCA approval. CCA going defunct doesn't necessarily give us good effect. Sure, we got stories like Civil War, Alias, the X-Men issue which put focus on gay marriage and more black characters getting the spotlight. However, it also brought back the over-sexualization of female character like Black Cat, Star Sapphire, Power Girl and recently Catwoman as well as Starfire. At the same time we also have the beginning of fridging in which a character is being introduced for the sake of being killed to motivate the main character.

What was the problem with CCA ?
The problem with CCA was extremity. What point is considered too much ? CCA went too much with Marv Wolfman name banning and that's the point where it become ridiculous. Of course the issue become more complicated when it comes to religion as there is some line that we DO NOT cross, but to me, when you start to treat people like they are dumb, that's too much.

So that's all about CCA. In case you are wondering, I will not touch about the national issue here as it is not the purview of this post, and I may not be the best one to delve deep into it, but hopefully, you can get the connection on why I was comparing CCA to that particular issue.

So what do you think about CCA ? Did they actually went too far or do you wish they actually still exist ? Sound your thought in the comment section. Chronicle will return this Wednesday so stay tuned for that by following and like Comikrew Studio right here and on Facebook. Don't forget to subscribe to my comic on Tapastic and finally follow and hit me up on Twitter.
About Superheroes Comic Book Movie INFO KOMIK Malaysiaku yg. tercinta Terminologi and Jargon