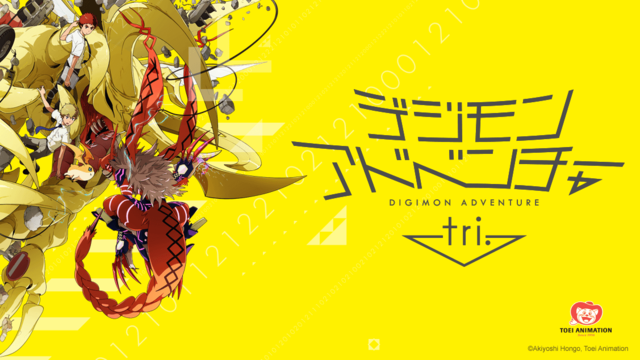 Digimon Adventure Tri continues with its third part. The second part provide us with massive cliffhanger with revelation of the villain. Can the third part carries the wave ?Hit the jump to know my thought.


As usual with Reviewstravaganza, I will not hold back with spoiler. There are some big moment I wish not to spoil but I will spoil the whole first and second part. You've been warned.

The third part of Digimon Adventure Tri has been considered too long to be released, which is true as even I almost forgot what happen in the second part as the first episode started. That being said, it had a major shift in format to me. The animation looks a lot better, and it feels more like a movie that the first and second; especially the first part. The whole part only have one major fighting scene in the climates, but it was a very good and perfect build up to that in what I would say the second most emotional scene yet.

The story picks up few days after the ending of Ketsui (the sub for the second part) where the DigiDestined are still dealing with the aftermath of whatever happen to Meicomon. Koushiro is getting unhinged on solving the infection problem before their Digimon being infected without realizing that they have been infected. The Digimons were an option to end all of these through a reboot in which the Digitized World is restarted from scratch but this also means all the memory they hold until now will be gone. With time's running out and the infection is looming in each of them, the Digimons decided to sacrifice themselves and reboot their world saving the real world in the process.

The third part is what can be considered as a midseason finale. In fact, it was sort of a perfect dark ending if not for the epilogue that followed, thought it will leave one big question left open. To me, this one triumph the rest of the two part. It feels like it got a new writer as it filled with bromance, running gag, and better emotional driven plot compared to previous two. The characters are in a way better shape despite some has been considerably backseated in favor for others, I come to this later. Despite that, it still manage to grab you right to the end of it.

The plot has such a good buildup. The animators wisely gave us multiple shot of the Digimon eyes similar to the one they did with Patamon, as to giving us the suspense of whether that particular Digimon is infected. The major fight in the climax was expected, but what wasn't expected is how it end up especially with Tentomon as the last Digimon standing when the rest are infected. To me that fight was build up throughout the part so well that when Angemon started to turned, it escalated quickly and we could have guess it will never end well.

In term of character, I guess you can already predict who got the spotlight in this. Koushiro takes the front seat in him trying to solve the problem while Takeru had to deal with the problem. The biggest kudos I can give to the writer is when they showed that despite Koushiro is the most knowledgeable, he is still so ignorant that he even miss the sign of infected Patamon and the rest of the Digimon. Sora had the running gag of she being the mother of the team and to me it is a step up from her character who doesn't believe in caring and loving from the first part. Surprisingly, both Taichi and Yamato took the backseat in this part. The first part is all about them and the second part touch on their conflict. This one still touch it but also making it a running gag of Yamato always fighting with his friend.

That being said, the rest of the human character can be considered taking a backseat as the spotlight are given more to the Digimon. Each of them are given character development but showcasing how they grapple the ultimatum of being taken down or being rebooted. Similar to the human counterpart, Patamon and Tentomon took the spotlight with Tentomon highlighted that it is fine to not know something as that what make us move forward.

The villain had a further twist in it. Of course, I had to googled again who the hell that person impersonating as Ken actually is, but the identity makes it more baffling especially considering he had in the previous installment. A bigger question is whether the rest of Digidestined including Ken himself are still alive considering we are only told their location are currently unknown.

The epilogue may hint we will be spending some time in Digitized World after this and while it might not happen, I am hoping some sort of upgrade on the evolution considering the what happen at the of the climax fight and how it will affect the chemistry between the Digidestined and their Digimon counterpart.

Overall, Digimon Adventure Tri part 3 was a turning point of the series. If you feel like you're dropping it, I think you should come back on board for the fourth part as we might be seeing more evil Ultimate Evolution Digimon in the future. In the end, I gave Digimon Adventure Tri part 3 a 4.0 out 5.0. It is a turning point for the series that drive the story into the right direction in every way. It is also a vastly better improvement in comparison to its previous two part and you should be excited on what coming next.

What do you think of Digimon Adventure Tri part 3 ? Do you agree with me ? Sound off your thought in the comment section. Digimon Adventure Tri can be watched online at Cruchcyroll and the previous two part are now availablei n DVD format. Stay tuned for a review of Girl on the Train next week by following and liking Comikrew Studio right here and on Facebook. Don't forget to subscribe to my comic on Tapastic and finally follow and hit me up on Twitter.
CINEMA.. CINEMA.. CINEMA Comikrew Reviews MANGANIME Movie-Freak Review Movie