X-Men : Days of Future Past review

Bryan Singer returns for another x-men flicks with an attempt to bring back X-Men to everyone attention after the successful X-Men : First Class. Did he pull it off ? Hit the jump to find out.


First of all, I have a very high expectation from this movie. From the early review, it sounds super awesome and maybe the best X-Men movie ever. However, while I think it successfully bring back everyone attention to X-Men movie and entertaining, it still failed to capture the magic done by Singer's previous X-Men movie and First Class.

Before I go into its flaw, lets get into its positive part first. Time travel is a tricky thing because you have to make sure first, it makes sense and second, people understand how it works. Singer did a good job of making sure everyone understand how the time travel work in  this movie by setting up the opening scene. With the opening scene, people can recall the process visually during the exposition that follow later.

Secondly, the special effect was spectacular. Each of the mutant powers were done nicely and it look real and the future sentinel also doesn't look ridiculous and you can sense the danger of this robot. The highlight of the special effect is certainly during the Quiksilver scene. It was the best speed effect I've ever scene and again, it look real. 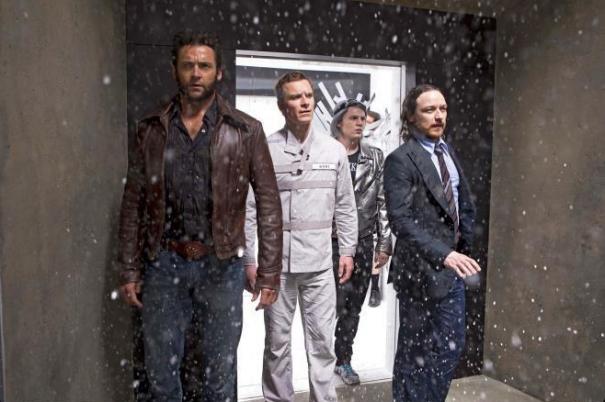 Thirdly, all the cast was wonderful, especially Hugh Jackman and Micheal Fassbender. The old cast is also great though Ian Mckellen look a little bit too tired in my opinion. Special shout out to Evans Peter as Quiksilver. He stole every scene he is in despite his ridiculous outfit. I would love to see him more in the future installment because I do feel he hold the comedic element in this movie. James McAvoy and Jennifer Lawrence are at their best but is hard to buy that they are supposed to be their future counterpart especially Mystique which I explained later in my flaws section.

Now that pass through the positive part, lets get into the flaw of this movie. First of all, there is no stakes in this movie like at all. The problem with the time travel movie is that you can expect the ending and it would work much better when there is a twist in the ending. 2009 Star Trek is the best example of this, you didn't know how the movie will end up despite the time travel. This movie however give you the exact thing that you expect without no twist at all. I was hoping for some twist for the future especially when hearing a quotes from Beast about the law of time, but it end up just like a normal time travel movie should be. Something happens, you go back in time and fix it and then everything fine.

Secondly, we knew that Singer did this movie to fix some 'error' in the franchise which most would assume to discard X-Men 3 and Wolverine Origin. However throughout watching this movie, it feels like Singer has disregard all of the previous X-Men movie except for First Class and maybe The Wolverine (no hint was shown throughout the movie). In fact, I was reminded throughout the movie that "the other movie doesn't matter, only First Class is" when every single thing is referred back to First Class though Singer did screw up the supposedly would be the best scene of the movie. That was the most disappointing thing to me because it seems Singer could simply just reboot it without any need to  relate with the previous movie.

Finally, Boliviar Trask motivation was ridiculous. I think Singer is trying to make audience to sympathize with him but, I do feel it would be much better if he is irredeemable instead of giving us a confusing motivation.  Also we all know in this movie, Wolverine did not have his adamantium skeleton yet. My question is, will Singer just gloss over it in the future installment or do we need to deal again with his memory issue and do we get another origin story of his skeleton because there is a twist of his involvement in weapon x at the end of the story.  I think do Singer should just make him have his adamantium skeleton in this movie so we don't have to repeat again, what he has build up in his previous two movie.

SPOILER HERE. SKIP IF YOU DON'T WANT TO BE SPOILED

The post credit scene featured Apocalypse which is set up the next movie. In the scene, he is referred as En Sabah Nur which is his real name. The problem is how many people know Apocalypse real name ? That scene end up confused people and failed to give that excitement impact to the audience. I do feel it should show Apocalypse waking up maybe due to the time shift, which just like I mentioned earlier, providing a twist to the ending.

Overall it is a great X-Men movie and worth to be watch at the cinema. However, it is not an amazing X-Men movies. At the end, I give this movie 4.0 out of 5. Just like I said, it is a great movie but it has its own flaws which disappoint me a little bit.

What do you think of X-Men : Days of Future Past ? Do you love it, hate it or don't care about it ? Sound off your thought in the comment section. Stay tuned for more movie reviews from us throughout this summer movies season. Don't forget to like us at Facebook and be sure to follow us at Comikrew Studio !!
About Superheroes CINEMA.. CINEMA.. CINEMA Comic Book Movie Comikrew Reviews KOMIK Movie-Freak Review Movie