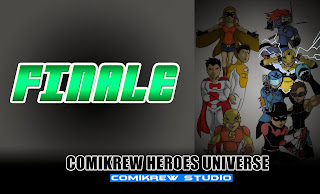 Both National Crisis and CHU 0RIGIN will come to end as we enter 2014 !! Hit the jump to check what you can expect from the remaining issues of both events.

Hopefully you guys are excited with the remaining issue of National Crisis and CHU 0RIGIN. With National Crisis ends in January and CHU 0RIGIN ends in February, a new storyline or arc will start soon. Stay tuned for the announcement from us. Don't forget to follow us at Comikrew Studio !!
About Superheroes COMIKREW Comikrew Heroes Universe INFO KOMIK National Crisis Special Event Teaser The Peacekeepers