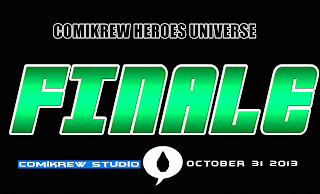 National Crisis is already in chapter two. After the end of National Crisis, the events continues with three tie-in from The Peacekeepers side. Hit the jump to know more.

As National Crisis will end in January, CHU 0RIGIN continues with the final title; The Wanderer. The series then continue to tie-in with National Crisis in February and March. Three titles announced that will tie-in with the first event are Hero Academy, Badang, and The Wanderer. An official statement has been released on this tie-in announcement.

On the tie-in announcement
You will see that at some part in National Crisis, the story will only revolved around the Sentinel Island base. So you are wandering what happened as Dice's plan in motion. This tie-in serves to explain more and show the other side of the story. The tie-in also serves to connect both of the sides into one.

What will be covered in the tie-in
Generally, all three tie-in will show what happen during National Crisis happen and its aftermath as well as introducing several pivotal characters. For Hero Academy tie-in, you will be introduced with several new characters; Paperbag, Sagittarius, and TNT. The story also serve to give a more in-depth story on The Hero and his academy. For Badang, you will have new characters but I can't spoil it for now. However, this story will show more on Darius' life as Badang. The Wanderer on the other hand will introduce his first archenemy; The Nemesis.

How this tie-in will effect the future of Comikrew Heroes Universe
National Crisis as you know will be the catalyst of the second event. The tie-in on the other hand introduce new characters that will connected to the characters in the CHU but at the same time are affected by Dice's plan. The tie-in will actually be important in causing the third events. So it will be down the line but you have to wait a little while.

So what do you expect of these three tie-ins ? Sound off your thought in the comment section. Stay tuned for more updates on Comikrew Heroes Universe. Be sure to follow us at Comikrew Studio.