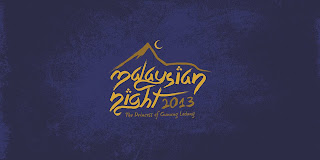 Just to let you all know, this doesn't go in order. So don't be sad if your choice is at the bottom. Also, we will not include things that we are personally involve because of course we like and enjoy all those stuff that will be considered bias. So, no props, backstage, or prologue video.


Super-awesome vlog video
Well this doesn't actually happen during Malaysian Night, however this video was that done so well it might be a tradition after this. One thing that strikes while watching this video is the cleanliness of editing. Also check the vlog transcript. Super awesome, super hilarious.Kudos to the video editor (psst: we know who did it)

The Malaysian Experience
Nothing can define Malaysia that its food. We wasn't present during last year Malaysian Experience (or Pre-Malaysian Night), so this year was just blow our minds. The foods were awesome, the drinks was awesome which makes us wonder; was it Bandung soda or just plain soda ?

The Lighting
Now, we go into the event itself. The lighting was no doubt spectacular. To do such a lighting in a hall usually for lecture is just amazing. Kudos not just to the lighting technician from Purdue but to the lighting guy of PUMSA itself for having such an imagination to see how each scene should looks like.

Asmaradana
Where should I start. In term of performance, this is the climax. As the first appearance of the princess, the dance took the inspiration from the successful movie itself.It really take the stake higher after last year Indian dance, which in my opinion is sort of the highlights of the event as well.  For such a dance, it will be a big shoe to fill for next year Choreographer.

Unexpected comedy
Well, this is the part where it was just plain fun. While some of the line in the skit was meant to be serious, you couldn't escape the benefit of double meaning. Some that strike everyone not just the audience but the people at the backstage are "Young and Inexperience" as well as "Never been touched by any men". While the line was supposed to indicate insult and underestimation for the former and to bring out the grand value for the latter, it turns out to work well for comedy too.

The drag queen
Acting as a woman is tough but one guy; Afiq Ady  just blow our mind with his performance as a woman in two scene. While for a short time, it sure stuck in our minds for quite some time. This is one of the best woman performance done by a male I've seen other that the one in Alice Wonders. That performance is a testament of the quality of acting possessed by the actors and kudos for that.

The son
With PUMSA only consist of college student, to find a 12 years old boy would be a pain in the @$$. However, the cast of Ying Ying as the son was a right decision as she nailed the role very good as this naive prince. To act as kid is really though as people may take it too far and turn out to be offensive but she able to draw the line between that.

The king and The Princess
As the story popularly told, the king and the princess are very important element in the story. And both managed to bring to life very well. The king managed to bring the character of a father who love his son but so selfish but at the same time doesn't act like some crazy guy. The princess on the other hand managed to show the gracefulness of the character and yet able to bring the emotionless and the danger that she can bring if you make her pissed off.

Well how about the others ? While they are not mention, they are not necessarily  bad, it is just all of those mention above managed to take the spotlight of Malaysian Night mostly in the point of view of the audiences. It took everything to make such an awesome performances and the audiences' reaction going out the hall is the testament of that.

Malaysian Night 2013 was a successful and we sure a lot of people are looking forward for the next year show. What do you think about it ? Was it awesome ? Did it blew your mind ? Sound off your thought down below, also tell us your favorite things during Malaysian Night. Were they same with us or different ? Stay tuned for updates from us and be sure to follow us at Comikrew Studio !!