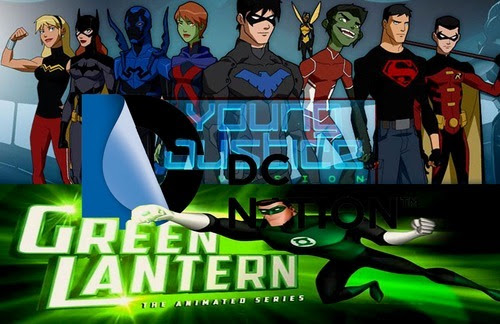 Green Lantern: TAS ended with episode 22- Dark Matter where the Green Lantern Corp went on head to head with Aya Monitor. I had to admit I did not really surprise when Hal said that Aya only destroyed inhabited star and planet but still it is still interesting to see that coming as it really suggest that there is still hope for Aya. The story ended with Aya sacrifice herself ( I used 'her' to show that she is also a life being" to destroy all the Manhunter that she has uploaded with her unemotional program of her which unfortunately destroy Aya as well. In the end, only Razor still believe Aya still alive and went to find her which was then followed by the blue ring of hope (I wonder why it wasn't the violet ring of love instead or is it just for female being?)

Kudos to the ability of  play with emotion several time throughout the half an hour show especially the love scene between Aya and Razor which almost made me cried. I also had to admit the ending cliffhanger was nicely done to suggest that there is possible redemption in everyone.

Though it was against the original storyline by putting Guy as the second Green Lantern instead of third but he was a correct choice as he the ultimate comic relief provider when Hal went all serious. Besides John had its spotlight in Justice League and also Young Justice.

Despite its cancellation but I believe if the story continues, a lot more can be done. I mean come on, you have four freaking Green Lantern of earth and seven corps !! The ending was nicely done as it was a cliffhanger with the blue ring of hope but it didn't suggest any plot hole question.

It was a satisfying ending for a good animated series. With all the hatred that Beware the Batman has received even before it is aired, the replacement had a big shoe to fill. I gave 4.5 star out of 5 for Green Lantern:TAS.

Another good animation end today is Young Justice Invasion with episode 20- Endgame. Unlike Green Lantern: TAS, I was very mad that it got cancelled especially after the ending cliffhanger !! Young Justice Invasion finale followed the final action of The Reach in their of effort to erase every evidence they invasion but totally whipped out the earth (seriously ?) . Using the same formula as season 1 finale, this episode gathered almost all the superhero ever appeared in the series including the red hood doctor who appeared only like what two episodes which make the viewers including me like "Who the [freak] is that ? Is it Red Arrow?" but the Red Arrow was clearly in his old red costumes totally similar to Arsenal except for their hair and right arm !!  I supposed these two can be avoided somehow as they clearly disturbed me.

Yet, the finale did seem to be lack element of surprise as it turned out there is 21 of the reach thingy instead of 20 and it is too late to stop it. Which end up the solution of saving the world is by The Flash and Impulse to run and reverse the magnetic pulse ( Erhh.. it could have been better). To make worse, they just ripped off Justice League Unlimited ending by making Lex Luthor the apparent savior (like seriously guys ?). I really hope it had a much better ending than Green Lantern :TAS.

However above of all that, I still like how the producer decided to choose The Flash Family as the spotlight for the finale as we rarely see Flash being the main focus. Their decision of killing Kid Flash was necessary for me as I do have a soft spot for Kid Flash since season one and it does a little touchy for me.

The conclusion was goodly handled with Cassie and Tim are getting together, Impulse is donning the Kid Flash costumes while Artemis decided to don Tigress as Kid Flash new partner (Hopefully they didn't kill Wally for the intention of making Bart the next Kid Flash and Artemis is not making Bart her replacement for Wally). Static Shock is joining the team and is a part of Bumblebee and The Guardian (which is a little offensive when we think back about it- "The black trio"). But nothing beat the cliffhanger as Vandal Savage arrived at Apokalips and make a deal with Darksied !! WTF Cartoon Network and you cancelled it ?

Despite it poor handling of character in the finale, it still a good ending and worth to watch. Hopefully they continue Young Justice sometime in the future. For now I give 4 stars out of 5 for its finale (Sorry but it certainly not as good as Green Lantern finale).

So, what do you think of my review ? Agree of Disagree ? Sound off your thought in the comment sections. Comikrew Studio will be releasing our line of comic back on April 12 so don't forget to check it out and be a fan of Comikrew Studio !!