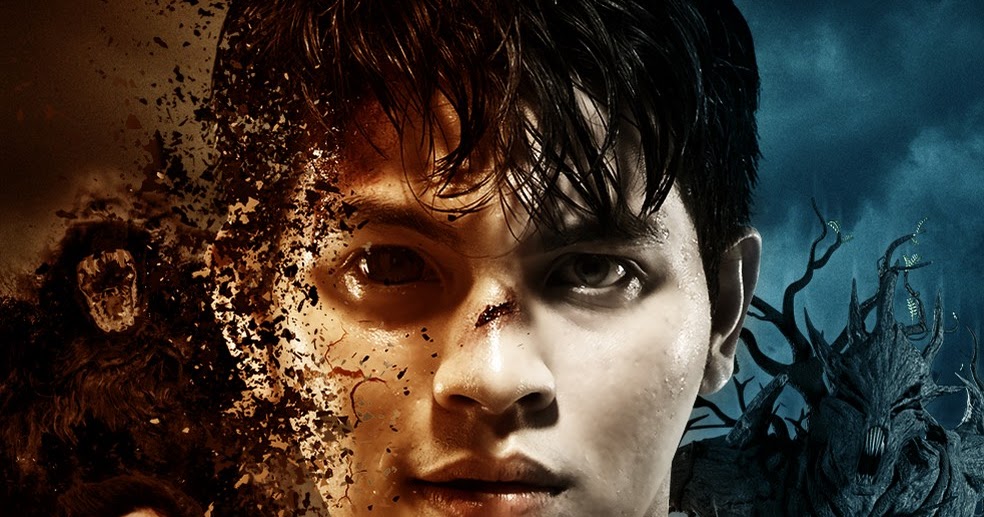 I didn't watch much Malay movie, but this one caught my attention because it has a comic book tie-in as well as the theme that similar to my Bunyan's concept idea. Hit the jump to find my thought of the first (?) Malay movie that I watched at the cinema this year.


As usual with Reviewstravaganza, I'll be spoiling the movie, maybe not choked-full but expect some spoilers down the line. Alif Dalam 7 Dimensi (AD7D) revolves around Alif who is a college students and possessed the ability of see ghost. He then got dragged with Anna and Naim; who are doing research on supernatural and paranormal dimension, when Anna accidentally (?) picked up a possessed relic and being attacked by ghost. As the story moves on, we learn that Alif is also keeping secret that might harm the lives both of these people and himself. There are two standouts from this movie, first is the cast. All three main casts are absolutely good. Izzue Islam manages to be this mysterious aloof guy and also the scary possessed demon guy. I'll let him pass for wearing sweater in a hot weather Malaysia, for that terrifying possession scene in the middle of the movie. Juliana Evans was good as the boyish pretend to be the girl next door . I really like that she is neither the boyish-I-can-do-what-boy-can-do nor the damsel but somewhere in the middle. Did she do her won stunt ? I don't know. Though somebody said to me that she look chubby in this movie. Alif Satar was probably the standouts of the three. He was described as a jock but he is not that at all. Of course he is the comedic relief but not by being a jerk or a dumb which is a breath of freshness in a Malay movie. Unfortunately those who came for Kaka Azraff might be bitterly disappointed despite being credited and shown as the sexy female character in the movie. More on this later.

The second standout was the direction of the story. There is not shitty love triangle, in fact there is only a hint of love story in it. There is a lot of bromance which is not a surprise considering this is inspired partly from anime. The story itself feels like a manga as the hero featured possessed an ability that can destroy himself similar to popular shounen hero ( Naruto, Bleach, and Soul Eater to name a few) and there's a clear arc that lead from one story point to another. There is some elements that doesn't work which I talk more about it later.

The CG effects are debatable. When it is a smoky ghost, or a human size ghost, they look good. The human size ghosts are mostly practical make up so that mostly explain why. The giants tree ghost and the little ghost that steals food looks really fake as well as the rest of the giant ghost during the montage. I have sharper eye on CGI effect so I can spot them much easier, so I don't know about the rest of the audiences. That being said, the Saka was absolutely awesome. You know there are fake but it looks real enough for you to suspend your disbelief.

The weaknesses are exactly where the standouts are. It was really baffling to first billed Alif Satar against its own protagonists and include Kaka Azraff later in the promotion poster when she only there not more than a glorified cameo. The only explanation was that these two attracts more people than Izzue Islam himself.  Unfortunately for Kaka, she wasn't used enough in the movie. Going from a possessed roommate to a damsel in distress, the director could easily use her to set up a sequel instead.

Speaking of set up the sequel, the ending was predictable. I was setting up several twist in my mind before found out that they use the most predictable twist for the ending. I thought they are setting up that Kaka Azraff's character ends up becoming the new master for the Saka or the Saka was actually belong to Izzue's character mom instead of dad. The flashback montage scene at the end doesn't really work as well. I think it was to show that Alif finally forgive his dad but to me the rage wasn't shown enough throughout the movie and the scene doesn't do enough to explain its own purpose.

Overall, Alif Dalam 7 Dimensi manages to stand out as the good enjoyable movie for family and everyone should watch rather than waiting for it at Astro First despite its flaw. In the end I give it a 4.0 out 5.0. A good movie with acceptable CGI and weak ending.

What do you think of Alif Dalam 7 Dimensi ? Have you even watch the movie ? Sound off your thought in the comment section. Stay tuned for the next chapter of Chronicle this week by following and liking Comikrew Studio right here and on Facebook. Be sure to subscribe to my comic on Tapastic and finally follow and hit me up on Twitter.
CINEMA.. CINEMA.. CINEMA Comikrew Reviews JIN Malaysiaku yg. tercinta Movie-Freak Review Movie