DC Animated rounds up their animation slates this year with the most anticipated release of  Batman : The Killing Joke.Adapted from the famous comic book of the same name, can this adaptation lives up to its source material ? Hit the jump to check it out.

All works from Allan Moore and Frank Miller are famous for being unadaptable due to, in my opinion, its sheer amount of monologue, commentary and visual story telling that only works in comic. While the adaptation of The Dark Knight returns was successful, it is also good to remember that they decided to remove all the monologue from the story.

However, in The Killing Joke case, it is pretty hard to remove the monologue as it comes from the star of the book itself; The Joker. Hence, either adapt it completely or remove it and hope from the best. The director decided to stay faithful to the source material and some of monologue do stay in the movie with a varying effects. More on this later.

The Killing Joke focuses on the famous event that paralyzes Barbara Gordon and at the same time ambiguously recounts the origin of The Joker. To add up the running time, it also includes a prologue that introduces us to Batgirl for a good reason, but at the same time doesn't really work for reasons that I will discuss more down the line. Lets talk the good thing. The animation is top notch. There is some wonky one, especially during the flashback scene but you don't have to doubt DC Animated team. The fighting scene especially those that involves Batgirl is great and fluid. The art looks reminisce to Batman: The Animated series, but also looks close to the source material post the prologue, and pretty disturbing at times. And The Joker never looks as terrifying as the one portrayed in this. Some interesting easter egg is that the story in this movie is set after the death of Jason Todd while the actual one is set before his death.

The Killing Joke is a pretty dark book, and it is a wise decision to add the prologue, giving the movie some levity through Barbara and her gay workmates. This tough lead to a jarring shifting in tones, and to me the dialogue in those added scene are sometimes more natural than those in the actual adaptation.

Speaking of that, lets talk cast. Mark Hamill, Kevin Conroy, and Tara Strong are great in their respective roles. Mark Hamill especially shines in this movie as The Joker, his voice sounds like a more experienced and aged Joker, though he wasn't able to differentiate much his Joker voice and his pre-Joker voice. While they are supposed to be the same people, I do think it benefits to give the flashback scene a younger sound voice, maybe Troy Baker ?

That being said, some of the scene feels like both Hamill and Conroy are just reading from a script. This is currently the big problem of faithful adaptation from DC Animated. I actually enjoy the dialogue in the prologue and epilogue more as it feels more natural. To be honest, I would watch a full length Batgirl movie from prologue.

While the prologue feels more natural, it doesn't actually mesh well with the actual story. The prologue tonally looks more hopeful with a bright Gotham, levity, and feels like those episode of Batman : The Animated Series. As soon as the actual story starts, you can feel the shifting in tones and it really hurts the movie a little bit. The epilogue on the other hand is a much needed levity after that dark story, which I enjoy.

I had to agree that The Killing Joke is a Barbara story, but to me, it was always meant to be a Joker story and Barbara was the collateral in it. To add the prologue make the story very Batgirl centric and again hurt the movie a little bit.

There are two particular scene that I think worth to discuss here. The first one is the most controversial one, the rooftop sex scene. That one is disturbing and odd in some many way. Good job for Timm to hinted the teacher-student complex since the beginning, but that scene was simply a fridging for Batgirl to leave the role later and completely unnecessary. I actually agree with one particular review that mentioned the sex scene cause the event that followed in The Killing Joke seems like a karma for Barbara, while in the actual comic, it was purely coincidence that she was Batgirl and she was shot just because she is the daughter of Gordon. 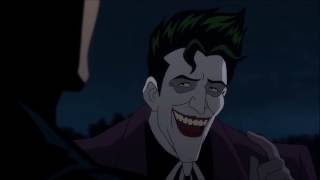 The second one is the ambiguously ending. That is some of the scene that was failed to be adapted successfully to the screen. I always thought that the story ended in a cliffhanger with Batman and Joker suddenly stop laughing but the rain continues. It the movie though, SPOILER ALERT, the joker stop laughing but Batman continues until the screen fades, suggesting that famous theories he snapped Joker's neck is very much true or is it ? Well I suggest you to check it out and decide it yourself.

Overall, it is a good animated movie that everyone should watch and certainly to best DC movie yet to come out this year (Sorry BvS). In the end, I give this movie and 3.5 out 5.0. Good adaptation, but a too faithful and jarring tonal shift hurt the movie a bit.

So what do you think of Batman: The Killing Joke ? Sound off your thought in the comment section. Stay tuned for my Suicide Squad review and also Bleach review (finally, you're ending). To keep up to date, be sure to follow and like Comikrew Studio right here and on Facebook. Don't forget to subscribe to my comic at Tapastic and finally follow and hit me up on Twitter.
About Superheroes CINEMA.. CINEMA.. CINEMA Comic Book Movie Comikrew Reviews KOMIK Movie-Freak Review Movie