Love Marathon #2 : Not The End is now available on Tapastic

The next title for Love Marathon is now available at Tapastic. The plan is supposed to release When Love Meets Anger, but I decided to release Not The End as a tribute to my friend who passed away last week due to cancer. 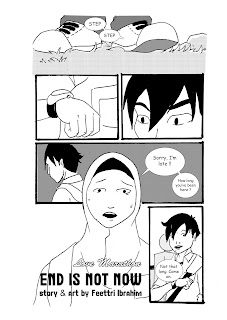 This comic is a tribute to my friend, Late Noor Fadhilah Ahmad Lokman who passed away last week due to cancer.Hopefully, to those who are reading this would pray that her be among the blessed one. When Love Meet Anger part 1 will be released later this week.

What do you think of the comic ? Sound off your thought in the comment section. Stay tuned for the first part of When Love Meet Anger part 1 later this week. Follow and like Comikrew Studio right here and on Facebook. Be sure to subscribe to my comic on Tapastic and finally follow and hit me up on Twitter.
COMIKREW comikrew love story KOMIK Special Event