Hugh Jackman bid his farewell towards his most recognizable role ever with Wolverine's third solo movie; Logan. Can Jackman leave this role in high note with his swan song ? Hit the jump to find out.


Logan has become one of 2017's highly anticipated movie due to several reasons. It's this first R-rated Wolverine movie, and more importantly it would be last time Hugh Jackman taking the iconic role. After the disappointing turn of X-Men:Apocalypse, many hope this would turn the tides. So, the end result ? This movie would satisfying to some but may not for others. 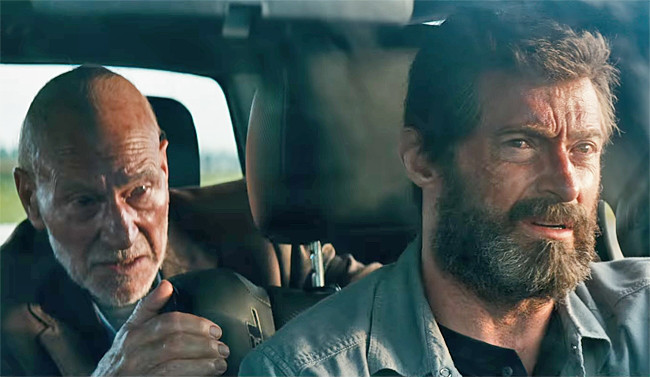 Before I go in-depth with my review, lets recap the plot. The movie revolves around an aged-up Logan (Hugh Jackman) living in isolation along Prof. X (Patrick Stewart) and the world hasn't had any mutant new for almost 25 years. Everything changes when a girl show up with a mutant ability similar to Logan and he now has to save the girl from being hunted by an organization that very much want her back.

Logan is a very small scale story in term of its mutant power as Wolverine is the fanciest power you can find in the movie. However, that what make its very good. The big problem with Apocalypse is that there is too much focus on spectacle that the character work was lost. However, with a small scale action we got to know and empathize with the character more so when something happen to them, we care.

The plot is very straightforward and is the only existing Old Man Logan element in this movie. It's a road trip movie. There is few question that came up throughout the movie, but the biggest one was the movie is set in a year after the new timeline in Days of Future Past so what happen that lead to the beginning of Logan ? I won't spoil it but that was the biggest twist and it was explained slowly but effectively and didn't bother to dwell to much about it.

This movie has some parallel with the Legion TV series as it explores the danger of this mutant power to its owner. Both Logan and Professor X in this movie suffers something that cause their mutant power become a danger to themselves and people around them. At the same time, it posed the question to us on how we've seen them for almost 20 years to have this god-like power, but in the end they are just human like us.

With a small scale action and straightforward plot, a movie like this will have to hinge on the cast. Hugh Jackman and Patrick Stewart delivers an A+ level performance. I'm not sure of Hugh Jackman; that berserker rage was good, but it just Wolverine, but Patrick Stewart could be Oscar worthy. We've seen him as this wise and calm Professor but when the tides turn on him, we could see he become bitter and at some level disappointed at himself which he directed at Logan most of the time.

However , we could not forget Dafne Keen who portrayed Laura. Kid's screaming could easily turn annoying as it sounds like tantrum but she manages to deliver that rages scream nicely. When she talks, it sounds okay when it was Mexican, but she sounds like an adult when she speaks in English. It could be just that she listen from her step-mom speaking but it could also be writing problem. Overall, she is very good.

That being said the only thing that hinder the movie is the villain. Boyd Holbrook's Pierce is very good as this cocky villain who actually can't do anything. This also applies to Richard E Grant's Rice. There is another villain that I would not spoil that really bring the whole movie down, and also explains why Sabertooth was set to appear at some time. The movie could use a better villain, maybe a villain with a fancier mutant power.

Overall, it was a very well done movie that studies mortality. It is rated R so not everyone can watch him, but I highly suggest the movie. In the end, I give this movie a 4.5 out 5.0. A very good Wolverine solo outing and would have been perfect if not because of its weak villain.

What do you think of Logan ? Do you agree with my opinion ? Sound off your thought in the comment section. Chronicle will return this week so to stay up to date, be sure to follow and like Comikrew Studio right here or on Facebook. Don't forget to subscribe to my comic on Tapastic and finally follow and hit me up on Twitter.
About Superheroes CINEMA.. CINEMA.. CINEMA Comic Book Movie Comikrew Reviews KOMIK Movie-Freak Review Movie