The Star Wars returns with the release of the second part of the new trilogy; The Last Jedi (TLJ). After the widely acclaimed of The Force Awaken, can TLJ give satisfaction to the fan ? Hit the jump to read my in-depth review. BEWARE; THIS REVIEW WILL BE A FULL SPOILER REVIEW


TLJ promotional release has attempt to conceal as many plot point as possible but still capable to excite fans on what to comes in the movie. The Force Awaken has no doubt reignites the excitement of this franchise and despite the poor reception of Rouge One, people are still excited for this movie. Unfortunately as you might have seen on the internet, the critics praise it while the audiences are divided and I'm the one in the disappointed camp. I don't hate the movie, but I definitely didn't love it.

Before we get more in-depth, lets touch on the plot first, TLJ kicks off immediately after the end of The Force Awaken and possible few months after (yes guys, there's a split timeline in this movie). Rey finally found Luke an attempt to bring him back to fight with the resistance, while the resistance themselves tried to defend themselves from being decimated by The First Order. As the resistance force grew thinner, it is up to Rey to bring back Luke who has given up his Jedi lifestyles.

TLJ is packed with awesome moments, however it has a weak plot structure and writing. Put Episode 5 and this one side by side, the structure exactly the same; the good guy side is losing, the main protagonist is separated training with a master jedi who lives alone somewhere while the secondary character goes on to another adventure in a city and got betrayed by someone from there, and final battle where the good guy lost but live to fight for another day. I'll get to the character but the fact the middle part is so draggy means there's something wrong with the writing.

The story touches on some interesting fact like War Profiteer, but never really delve into it. I would love if Snoke is revealed as a war profiteer and just trying to escalate the war so he could sell more weapon, but nope, they wasted Snoke. More on that later. 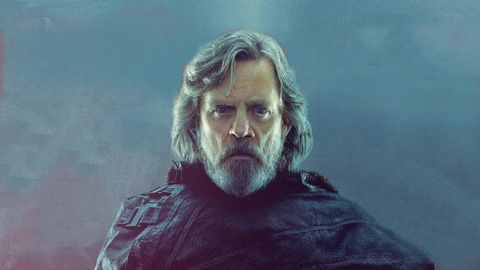 In term of the character, the returning cast from the old trilogy are no doubt spectacular in their performance. Mark Hamill is just a great as Luke Skywalker who carry this burden of guilt for what happen to Kylo Ren. The fact that he couldn't shake off his Joker voice makes most people think is he gonna be evil ? Carrie Fisher gives her final performance before her unfortunate death in December, and there's definitely a hint that she is not feeling well as she does look tired and actually spend most of her time in the movie being comatose. However she does have a great moment in the movie when she use the force to save herself.

The bad writing however become more apparent in the returning cast of the new trilogy. All of the have arc but their archetype characteristic has been ramp to 11.Let me go one by one.
As I was saying earlier,  all the main character had their moment and the actors give good to great performance, but the way they are being written are just awful. The side characters are much much worse. Snoke, Phasma, Holdo and whatever that evil droid is are simply wasted. General Hux was less wasted, but I think it is more of Domnhall Gleeson is just enjoying playing that role and gave his own take of the character. One thing that I realized from this new trilogy is there's no side character that we actually care of. The original trilogy had Lobot, Jabba the Hut, Boba Fett and definitely Admiral Ackbar. The prequel trilogy you had Jar Jar Binks that everyone just hate, you have Mace Windu, and all the CGI character you've seen. These are all one-shot character but people love them nonetheless. The new trilogy don't really have it. All the one-shot character is just one-shot character that people will not care as episode 9 come, so far I could think off maybe Benicio Del Toro DJ and Hux.

The CGI effects are excellent if it is the one recycled from the previous one, but if it is a new one, it is just awful. The creature in the Canto Blight was really really bad and make that boring draggy scene much worse. Also I mention the CGI rock that really makes Rey a very unconvincing Jedi.

Another flaw that I am seeing is there is not risk being take. Why does Empire Strikes Back is so great ? There's stake on each character. When you see what happen to Han Sole frozen in carbonite and Luke's hand being cut, you had the feeling that oh, no one is safe in this movie. But in TLJ, the only character being killed are either character from the original trilogy (RIP Ackbar) or side character you barely care (Holdo and Phasma). They attempted to make look like they gonna kill Finn, but of course he got saved by Rose; who if she died, she become the perfect Mary Sue of the trilogy. Stake and risk doesn't come from death only,Hunger Games Katniss in the original novel loss her hearing. Heck, Han Solo frozen in carbonite. You could give the character stakes from something like that.

I might be ranting in this review, but like what I said in the beginning of this review, I don't hate it but I didn't love either. It is definitely one of the Star Wars that I won't be watching again right away. In the end, I give Star Wars:The Last Jedi a 3.5 out 5.0. It is definitely a good continuation from the previous movie and has a lot of good moments in it. Unfortunately, it is draggy and has a lot of bad writing in it as well.

What do you think of Star Wars:The Last Jedi ? Do you agree with me ? Sound off your thought in the comment section. Stay tuned for the very last chapter of The Promise next week and get ready as I'm getting back in action in next year January. To keep up to date, be sure to follow and like Comikrew Studio right here or on Facebook. Don't forget to subscribe to my comic on Tapastic, and finally be sure to follow and hit me up on Twitter.
CINEMA.. CINEMA.. CINEMA Comikrew Reviews Movie-Freak Review Movie SENI