What YOU should know before The Promise 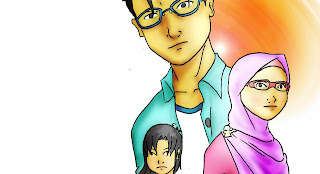 This August, the story that begins in Love Story in Eids will finally conclude with a five-issue miniseries The Promise. Before that, lets do some recap so we can be fully prepared when the miniseries finally kicks off.


The Promise will officially kicks off on August 24th on Tapas while the Malay version; Janjiku will be released on Mat Komik shortly after. The miniseries will be a part of Comikrew Love Story titles in Tapas. It will set to conclude the love story between Tri and Ziera that started off in Love Story in Eid back in 2013 (rereleased in 2015).

Before jumping into The Promise, there are several titles needed to be read in order to understand the relationship between the character better.

Love Story in Eid aka Kasih Lebaran is 3 issues miniseries released as a part of the first ever Comikrew Studio Eid event. The story revolves around Zeira's effort bringing back Tri after an incident causing him to run away. This story also briefly introduced the reader to Asnida who is set to play a bigger role in The Promise. Another prologue was later added during its 2015 re-released that revolves around the exact incident that kicks off  Love Story in Eid and sets up Asnida's character more. Both English version and Malay version can be found on Tapas and Mat Komik respectively.

Attack of the Hantu Raya is a one-shot released as a part of 2015 Comikrew Eid event. The story set one year after the end of Love Story in Eid and revolves around the meeting of Ziera with Tri's first ever love; Ika. While the story is not directly affected from its predecessor, it does set up Tri to move on with his love life. Both English version and Malay version is available to read at Tapas and Mat Komik respectively. 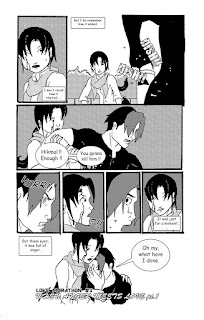 When Anger meets Love is a two-part short comics released as a part of last year Love Marathon. The story revolves around Asnida and her new lovelife post Love Story in Eid. The story will set up her character in The Promise, and has been retroactively set approximately six months before The Promise. The English version has been released on Tapas and the Malay version is now available to read at Mat Komik.

Timeline and Cast of Characters

The Promise will be set one year after Attack of the Hantu Raya. Tri, Ziera and Asnida will be the three main character with both Hikmal and Dr. Latiffa returning from When Anger Meets Love. A new character; Azhan will be a new character introduced that act as somehow from Ziera's past.

I'll be doing a more in-depth introduction of The Promise. Stay tuned for a preview of what's coming to Comikrew in August next week by following and liking Comikrew Studio right here and on Facebook. Don't forget to subscribe to my comic on Tapastic and finally follow and hit me up on Twitter.
Budak Kampung COMIKREW comikrew love story KOMIK LINK RAYA S.M.A.P. SENI Special Event The Teen of The Village