As Ramadhan is just about a month away, it's time for the other Comikrew annual event; Eid/Ramadhan special. Hit the jump to check what's in store for this year event as well the expected release date.


As per usual, Comikrew Studio returns with its annual Eid/Ramadhan special. Unlike the previous year, this year the event will consist of several individual short stories that centered around the celebration of Ramadhan and Eid in the future. The very first promo that will also act as the official poster for this year Eid has been released few days ago. 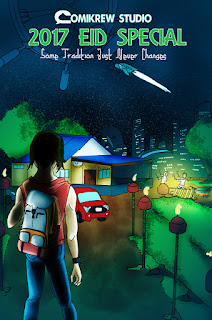 This year Eid Special is different from the previous year, why ?
Previously Eid/Ramadhan special has always been a continuous story throught the Ramadhan and Eid, this year I decided to shake up the formula a little bit. One of the reason was due to the fact that Love Marathon has one continuous story and the upcoming The Promise is also similar. To have an individual story for this one not just give the readers a space to breath but also a space for me to play around with the story.

What are some of the inspiration for the story ?
The biggest one is actually the popular cult series Black Mirror. That being said, it will be as harrowing as the series. All of the story examines what if a particular situation is brought too far closing the extreme and ask us to examine back our action. Some of the story is also inspired from what I saw in real life as well.

Is there any overall theme ?
I think the overall theme is exactly like the one shown on the poster which is 'Some tradition just never changes' and I think it echoes throughout all four stories especially the last one. What I'm trying to imply is that no matter how far and advanced we are, there will be tradition that will never changes and each every story will showcase one tradition.

So we now know there'll be four stories, care to drop some hint ?
I actually moving forward with post-production for the first two and about to start with the third one. The first two that will actually takes place in Ramadhan are titled 'Best in the World' and 'Sincerely for Money'. The other two that set during Eid will be titled 'Traveller's Melancholia I and II'. I can't tell much other than it will be released bilingually on Tapastic and Mat Komik but, more details will be released next month.

What is you hope for the event ?
When I was a kid, I always read comic drawn specifically for Ramadhan and Eid (mostly through Ujang and APO) and it is getting less and less nowadays. My hope is that this tradition will returns and Comikrew's Eid event will be part of what rekindles it. My Eid's event sometimes is less about the Ramadhan and Eid but more about whatever happened with the character, and this is the first time it is taking a more prominent factor and I hope the readers enjoy reading it as always.

Comikrew 2017 Eid Special will officially kicks off in June and running throughout Ramadhan and Syawal. Stay tuned for its update later next month by following and liking Comikrew right here or on Facebook. Don't forget to subscribe to my comic on Tapastic and finally follow and hit me up on Twitter.
CERITA AKU COMIKREW comikrew love story INFO ISLAM one-shot RAYA SENI Special Event Teaser