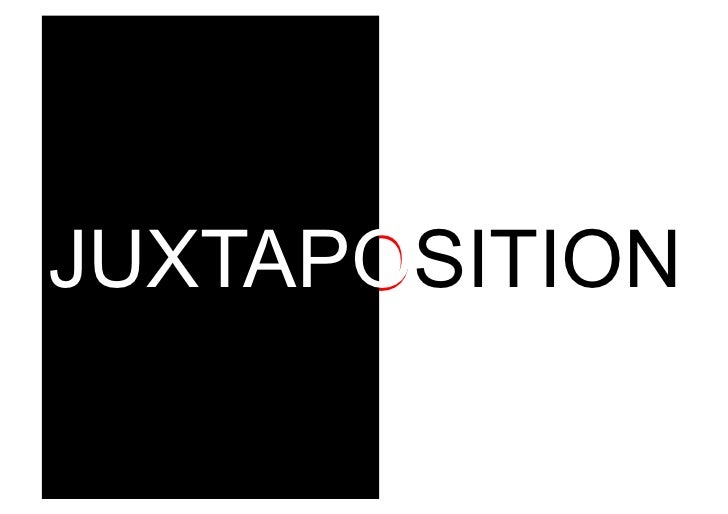 Kicking off March is a topic that I wanted to write for quite some time. Juxtaposition is might a rare word to some, but you have no idea how often it has been used in our daily life. Hit the jump to dive into this extremely powerful tool.


Every single day, we watched news, or saw in social media or read an article about someone bringing up a point and comparing in with something else either for the better or the worst. POTUS Trump (not to get politically) did it several times to varying degrees of effect. The rising faction of 'FlatEarthers'; those who still believe the earth is flat, did it to prove their ongoing ideology and even we ourselves in everyday left tend to compare things. Juxtaposition, essentially is the act of putting the two things together to cause the comparison.

However, it has to be remember that Juxtaposition is used to support the idea brought. For example, conspiracy theorist love to pick a scene in The Shining and juxtapose it with any facts of moon landing to support the idea that Stanley Kubrick directed the Moon Landing and blatantly reveal it in the movie.

There are two ways my lecturers told me back in college on explaining Juxtaposition. The first one is to put two unrelated things side by side to prove an idea. The other one is juxtaposition help us to interpret what one's idea is supposed to be but not what one's idea actually is.

In literature, or closer to my alley, comic book, Juxtaposition is used in creating protagonist and antagonist or in showing character development. Some author might juxtapose a present time scene with a flashback to show how a character has growth or changes. Sometimes the protagonist and antagonist may share the same idea but execute differently. The best way to showcase this is Marvel's Civil War (the comic not the movie), both Iron Man and Capt. America believes in protecting the earth but one believes in open identity while the other one in secret identity.

And because it is such a powerful tool, it is also used in visual representation such as advertising and education. Most environment ads use juxtaposition and every single infographic relies on juxtaposition to sell its idea. Again I need to remind you that Juxtaposition is a method to support an idea not prove a fact. To prove a fact, a juxtaposition must followed with a fact.

That being said, juxtaposition is not a surefire way to sell an idea, proven by President Trump in multiple occasion. So lets take this chance to review a bad juxtaposition infographics (you can also say this is as the continuation of my rant against the Flatearthers).

So for those who do not speak Malay, essentially the FlatEarther sells their idea but juxtapose two Quran verses. The first one is from Surat An-Naazi'aat verses 30 and they quoted, 'And after that, they made the Earth into the shape of an egg." , which is a misquote, I came to this later. The second one is from Surah Adz-Dzariyaat verses 48,  and they quoted, 'And after we spread the Earth, we spread it nicely."

Lets go with the first argument to go against theirs. Their first verses is misquoted. None of the official Quranic translation mentioned Earth is being made into the shape of an egg. Even if it is quoted correctly, the picture they juxtapose is not an egg, it is an broken egg. When we say the word 'egg', most people will imagine it to come its shell. If you're counter argument saying that egg is also not sphere (they are ellipse), do remember that one, you need to know the context of the verses. The verses is  delivered to Rasulullah years ago in Arab, so what egg does the verses actually referring to ? And two human's egg (Ovum) do resembles the shape of sphere. This is where the in-depth studies in Quran and Sunnah comes in.

Words tends to got lost in translation. The Malay word, 'Hampar' often translated into 'Spread' in English but they both got an entirely different meaning. The word 'Hampar' means 'to be open wide and flat' while the word 'Spread' means 'to make something increase in surface area or width or length'. This is where the second argument comes in. Arabic is a very poetic language. To truly understand the Quran, which has been recognized to be more poetic that a poem itself, you need to learn the Arabic language itself. This the reason why Balaghah (linguistic for Arabic) is a big part of Advanced Arabic.

Going back to my example, 'Hampar' is making something flat which where the arguments comes, but that is not the case on 'Spread', as you can spread something on a non-flat surface.

That being said, I'm not saying that the earth is definitely sphere as I don't have proper fact to support that and honestly I'm not the best man to spit out the mumbo-jumbo of it. This is just one example of how bad juxtaposition backfires the idea itself and it has happen several times recently.

As I was saying, juxtaposition is a strong tools but it is also a double-edged sword. As shown in my example, a wrongly done juxtaposition can hurt your argument and potentially destroyed it.

So do you have a better understanding of Juxtaposition ? Have you used it recently ? And what do you think of my rant against Flat Earthers ? Sound off your thought in the comment section. Stay tuned for my review of Fox's Logan next week by following and like Comikrew Studio right here and on Facebook. Don't forget to subscribe to my comic on Tapastic and finally follow and hit me up on Twitter.
CERITA AKU INFO ISLAM Malaysiaku yg. tercinta REPEKAN Terminologi and Jargon