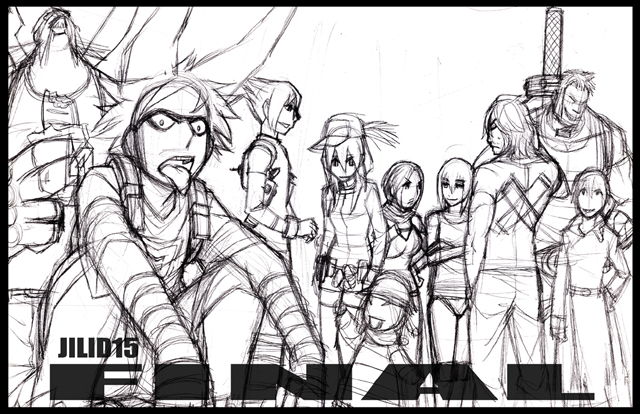 Zint finally concludes his longest running comic; Kijiya with the final volume 15. After a long journey, twist and Naruto rip-off, does this series get a satisfying conclusion ? Hit the jump to find out.


Before I start, let me preface by saying full spoiler for all the volume. Secondly, this volume surprise me by having sold out before it was even released to the public. Luckily (I guess), it was reprinted for IBFKL 2016 so I got my hand on it immediately. So by having it sold out, you would think it has the greatest ending, right ? It does but a very cliche one.

Kijiya is a tale about Kijiya who is a half demon and half human living among Demon Hunter.It his struggle to find a place in the world where both human and demon are killing each other. The volume 14 concludes at a time jump after a massive battle at area 0109 and Kijiya was nowhere to be found. Laryu who possessed a new found power has gone out of control and while on his mission, he crossed path with a now adult Kijiya.

Now, volume 15 kicks off immediately from that event and Laryu was secretly tasked to hunt Kijiya. Worried that he soon lost control of himself, his other two teammates decided to find him before found out that Laryu was fighting with Kijya, Naruto style. They stopped both of them from killing each other and every end wells before they decided to take their own path helping people, and demon in their own way.

The biggest problem with this volume is it had to many plot point to deal with from the time jump.Other than the girl character, every other character has their own problem to deal with. The big guy has personal conflict with his sort of servant, Laryu (I don't know why I only remember Laryu name) has his own personal issue and of course Kijiya as well and all those conflict was neatly solve in a very half-ass way. While Zint managed to set it up pretty nicely, it is very obvious it was rushed.

The emergence of the half demon being was very unnecessary as well as it doesn't do anything to the plot. Allisa can just found the cure and help Kijiya controlling his power.The final fight was top notch like the rest of Kijiya's fight scene but it actually doesn't bring anything new to the table. The fact that it is also inconsequential make it another disappointing point as well.

I touched a little bit on the review for Naruto on how comic book creator sometimes a little bit protective to its character. While Masashi Kishimoto did give consequences to the rivalry by taking away both Naruto's and Sasuke's hand, Kijiya goes way over protective by not taking anything away. I would have love if he end it a little bit grim by making Laryu a rogue hunting Kijiya forever (I thought that is the ending based on the character sheet).

In term of art, Zint still maintain the quality of art really well considering how his latest release (Raiden) turns out. However, it does worries me a bit that this might be the last of his quality outing as I haven't read read anything new from Zint post Kijiya and I really hope he goes back to his 2Dudes, Eli style of story telling back.

Overall it was a decent epilogue for Kijiya. If  you have been following the story since volume 1, go and get it. If you are looking for great comic from Gempakstarz, I might suggest look for Te@mare of any of Xanzeviera's collection instead. In the end, I gave Kijiya and 2.5 out 5.0. It was good read, but I was expected a better conclusion especially when it comes to Zint who gave a very good ending for literally every story that I've ever read.

So what do you think of Kijiya ? Sound off your thought in the comment section. Stay tuned for more reviews whether it's movie or comic by following and liking Comikrew Studio right here or on Facebook. Don't forget to subscribe to my comic at Tapastic and finally be sure to follow and at hit me up on Twitter.
COMIKREW Comikrew Reviews KOMIK Malaysiaku yg. tercinta SENI