MILLIONS apologies but I'm BACK !! 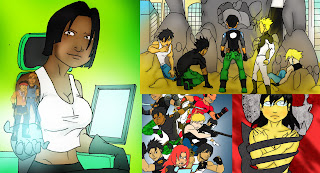 It was tough but after a month of silence, Comikrew Studio is finally back !! Millions apologize for those who have been waiting for new post but before we move forward, lets catch up with those we have missed.

Skuad Satria #13 : Hari-Hari Terakhir Casey Alcott
And there we have catch up with what have happened back in September. While I finally got an internet connection, I might be out of town or the connection is bad where I am, so the best place to keep in touch with me is either Facebook pages; Comikrew Studio or my Tapastic account. So be sure to like and subscribe to that to be up to date. Stay tune for Comikrew October Preview later this week, but till then keep following us here at Comikrew Studio.
About Superheroes Chronicle COMIKREW Comikrew Heroes Universe KOMIK Malaysiaku yg. tercinta National Crisis Skuad Satria