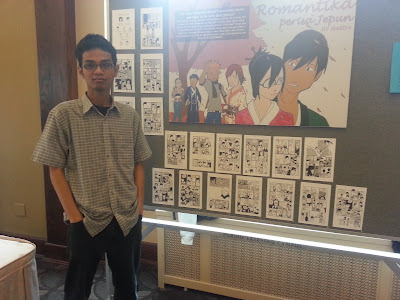 Using the pseudonym feettri, I have been drawing for more that 10 years. On 2000, I began to draw an indie comic titled "Budak Kampung". After 12 years, I have a list of comic portfolio coming from various genre. However, it was only on 2009 I started to build my own website through blogspot under the name of my flagship brand name; Comikrew Studio. I am currently working as 3d designer at MalProC Sdn Bhd, a company that do booth for exhibition. My resume is available here for reviewing.
Contact Info :-


Comikrew Studio is my personal flagship brand that I use for all my works. During my early works, I use the name of Komik Studio. On 2004, when I decided to draw comic seriously, I choose the name Comikrew Studio. One of my early work is a short titled "Budak Kampung" which I them made it into a series. By 2015, I have several completed series and currently working on two titles published on Tapastic and Mat Komik, an indie comic community site. The brand reaches its ten years anniversary last December, and while it might be not known widely, but I am really proud to have something that is connected closely to me. The biggest achievement for this brand is when one of the comic, Aoi's Love Diary is chosen for Art Voice Exhibition organized by Asian Pacific American Caucus (APAC).

The final book for Legend Korra debuted tonight. With the series being only shown online after the rating drop during last season, can this final season get back to its feet ? Hit the jump to find out. MILD SPOILER AHEAD
Read more