As those who follow my facebook and tapastic pages, you might aware the reason Love Marathon hasn't been updated yet. With nothing to update this week, I decided to review Bakuman live action which I got the chance to watch on the plane recently. BEWARE: FULL SPOILER.


If Rurounin Kenshin proves anything, it proves that you can accurately adapt a manga when the series completely ended. While Bakuman anime left several story arc in its adaptation, it more or less adapt the story accurately. However, shockingly this live action adaptation is Bakuman in name only. While you recognize the element from the stories, there is no where the Bakuman story you've read in the comic despite a pretty accurate adaptation of the look of the character.

Bakuman tells the story of Mashiro Moritaka and Takagi Akito who partner up to pursue a dream to become mangaka. At the same time Mashiro made a promise with Azuki Miho(who pursuing the career in voice over) to marry her when Takagi and his manga become an anime and she voice the heroine role. While throughout the two hour movie, you've seen some familiar and significant scene from the manga but you can't help to feel this is not an accurate adaptation of the story.

First off, the name Ashirogi Muto didn't even exist. The duo uses their real name throughout the movie, this maybe because of Miyoshi Kaya didn't exist in this movie, but Takagi could easily be the one who come up with the name. Secondly, Niizuma Eiji was portrayed as the antagonist of the movie and they don't even end up as friend in the end. Thirdly, the only two manga that you see in this movie is '2 Earth' and 'Money and Intelligence' which in the manga, neither actually shows Takagi's capabilities in crafting great stories (I actually thought they jump immediately to PCP during the scene he got the idea for Money and Intelligence). However, kudos to them to able to create a better scene of Mashiro got sick parallel to his uncle's death. 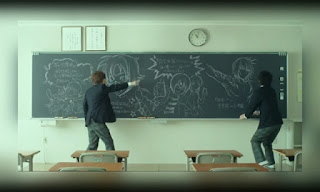 The ending was bizarre. The story ended with the duo beating Eiji by getting number one in the readers' vote before their manga got cancelled and the worst part is that they resolved subplot but never solve the main plot of whether Mashiro achieve his dream to marry Azuki. In fact, it seemingliy like the relationship was ended in the middle of the movie and the scene that is considered the best scene in both manga and anime (the hospital scene), hence making the audience left hanging on the fate of the couple. The question is are they planning for a sequel ? If they are, why not aiming for a more accurate adaptation (is Eiji become their ally in the sequel and they bringing in Tooru ?) ? If they are not, why left the audience hanging and what's with all the tease of their upcoming manga ? 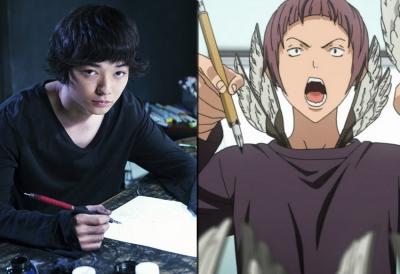 In term of casting, the guy is too old to become eccentric high school genius Eiji. They definitely nail the casting of Mashiro, Takagi, and Miho though again neither Mashiro nor Takagi has been shown as genius in the movie. Hattori's personality was changed a little bit for some reason and Fukuda's actor also seems to be to old for the part.

For a movie that tell the stories of people fighting through manga, I am fully aware that it is hard to make interesting. Despite some interesting visual throughout the movie, there is lack of the fight through the manga they drawn like PCP front color pages in the manga (which is why I thought PCP was the best manga to be used in this movie) which is quite frustrating.

What do you think of Bakuman live action review ? Do you agree with me ? Sound off your thought in the comment section. I'll try to update Love Marathon as soon as I got my laptop back to work and stay tuned for a possible Deadpool reviewstravaganza. later this week. Be sure to follow and like Comikrew Studio right here and on Facebook. Subscribe to my comic at Tapastic and finally follow and hit me up on Twitter.
CINEMA.. CINEMA.. CINEMA Comic Book Movie Comikrew Reviews MANGANIME Movie-Freak