Last Saturday, the newest season of Oh My English concludes its season with Telemovie Oh My Ganu 2. With the versus plot line seemingly trending this year, I was wondering, what makes a good versus episode  and does Oh My Ganu 2 fulfill the criteria ? BEWARE: FULL SPOILER.

Before I started this post, let me preface a little bit on what Oh My Ganu 2 is all about. The telemovie revolve around the famous 'will they won't they' relationship of Cikgu Ayu portrayed by Tiz Zaqyah and  Mr. Middleton portrayed by Zain Saidin. To ramp up the story, Zizan returns as his character from the first installment attempt to gain her love again, hence a versus plot line ensues.

Not to forget to mention that the audiences are able to decide the ending of the story by voting which character will ultimately win Cikgu Ayu's heart way before they knew how the story goes and based on their knowledge from the first installment. Ultimately, the winner was Zizan making the stories in a way goes again the cliche of Malay drama where the story ended up with 'They Won't' .

Now the big question, does the telemovie gave us a satisfying versus telemovie ? Some people might say it is hard to give a satisfying  ending because regardless what, one side will be pissed off because their choices lost.

I would actually disagree.A good versus should be able to make the audiences believe that both side deserve and can win and understand why the other side ultimately win in the end.  These two reasons are enough to say that Oh My Ganu is not a good versus stories.

As I mentioned earlier, the audiences must believe that both side deserve and can win. For that to happen, both character must be on a even playing field. So lets look back at Oh My Ganu2 , both character on an even playing field. The telemovie actually fulfill this condition when they pull off the amnesia storyline on Cikgu Ayu. With Cikgu Ayu lost her memories, the mutual love of her and Mr. Middleton is gone and open the door for Zizang to steal Cikgu Ayu again.

The second rule is neither character is an antagonist because you want the audience to support either of them and not hating either of them. Oh My Ganu 2 fails to fulfill this rule. Zizang was already been established as the antagonist in the first installment. So to make the versus works, the writer has to redeem the character so he become a good guy. Unfortunately, Zizang in Oh My Ganu 2 is still a jerk, that try to get Cikgu Ayu through lying, not particularly loved by Ayu's family, and SPOILER ALERT, he is insane as in the mental problem.

I was hoping if he wasn't redeem at the beginning, he was redeem throughout the movie, but the writer just make it worse by making him insane. That scene when Zizang was taken by the mental asylum was clearly the break between the two ending. They somehow manage to pull it off to make how Zizang and Cikgu Ayu stays together make sense, well, until the last scene. More on on that later. 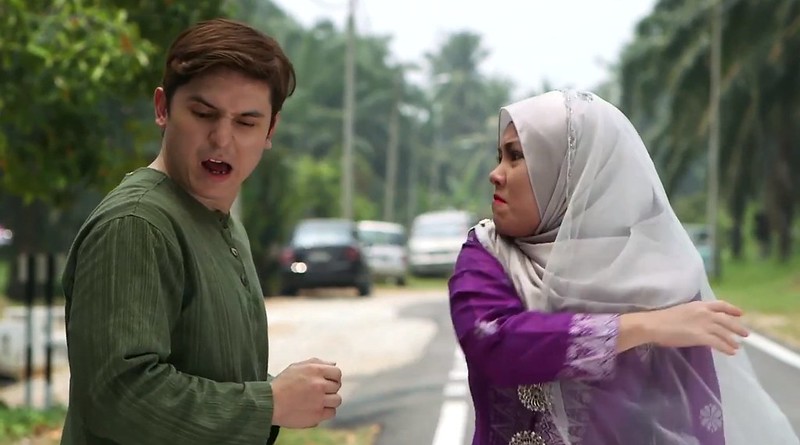 The third rule of versus stories is the audience must understand and accept that why winner ultimately win. In Oh My Ganu 2, after we are revealed that Zizang is crazy and taken into asylum, we were shown that Cikgu Ayu is taking care of Zizang (I was confused with this scene because I thought it was a flashback) and Mr. Middleton looks from far seemingly happy seeing that the woman he loved is also happy. This actually a good ending because Zizang despite crazy get a happy ending as Cikgu Ayu stays with him and Mr Middleton didn't end up soul-crushingly heartbroken. I prefer this because in a way it still opens the door for Mr. Middleton to get back together like he's lost the battle not the war.

Unfortunately, the story continues with the last scene where Cikgu Ayu actually got married with Zizang and now has four freaking children. This scene single-handedly make the story worse because the reason why Zizang actually win is unacceptable.He lied to Cikgu Ayu, Cikgu Ayu likes him back because she lost her memory and it has been hinted that if she regain her memories she will hate him again, he wasn't redeem at any point of the story and he ultimately got her by becoming crazy.

Can't believe I can rant about a telemovie from a series a barely watch this long. Well, to be fair, I am one of the fan of the 'Will They Won't They' subplot of Oh My English. To see how the stories ended so unsatisfying and not just that, there is a glimmer of good stories inside it making it just more painful. Maybe this is more of rant than editorial but with two more upcoming versus stories (Batman V Superman and Civil War), lets hope we would get a more satisfying versus stories.

So what do you think of Oh My Ganu 2? Do you agree with my opinion that it is not a good versus stories ? Or is doesn't matter at all ? Who did you vote ? Sound off your thought in the comment section. Stay tuned for more editorial and probably rant in the future. Don't forget to follow and like Comikrew Studio right here and on Facebook. Subscribe to my comic on Tapastic and finally follow and hit me up on Twitter.