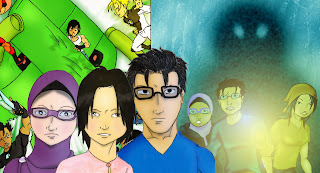 As announced earlier this May, all of Comikrew comic will go to hiatus for a special Ramadhan/Raya event. Hit the jump to see what's in store as well as this year theme.


This year Raya event will be named Ramadhan/Raya Special (or Romantika Ramadhan/Raya for the Malay version) and will be focusing on the theme of Back to the Roots. In term of special titles released, there will be two re-released and one new released. Kasih Lebaran (or Love Tale in Lebaran for English version) will be re-released in bilingual while National Crisis : Lebaran Adventure will only be released in English due to the Malay version is still behind in term of released dates. Attack of the Hantu Raya will be the new title for this year and will also be released bilingually.

On the decision to choose the theme Back to the Roots
This year has been a turning point for me. Graduating from college, Comikrew turns 10, and this is also the fifth year I done a Raya special, so with me going back to Malaysia continuing what I've started when I was in US feels fit with the theme and you'll see that Attack of the Hantu Raya also fit the theme very well as well.

On the re-released title.
Kasih Lebaran  was my breakthrough title when I was in MangaMagazine/Inkblazers and there is several thing brought from this to Attack of the Hantu Raya so it is very necessary to re-release it. Lebaran Adventure is honestly one of my favorite National Crisis issue so there's no way I wouldn't release it.
Special addition to the re-release title ?
Not for Lebaran Adventure but Kasih Lebaran will have an additional prologue to allow new readers to jump into the story with the need to know its connection to SMAP. I'll be releasing the prologue next week (May 27th) for the English version and it will be included along with the first issue for the Malay version.

On Attack of the Hantu Raya
It is sort of continuation to Kasih Lebaran and set a year after the end of Kasih Lebaran. As I said earlier it fits the theme really well because the character featured is from my very very first comic back in 2005. Don't worry if you afraid to get confused, other than Kasih Lebaran,you can immediately jump into it without any prior knowledge. Of course if you have, it would be a bonus.

What do you think of this year Ramadhan/Raya event ? Are you excited about it ? Sound off your thought in the comment section. Stay tuned for Love Tale in Lebaran prologue next week on Tapastic. Be sure to like and subscribe to us on Facebook, Youtube, and Tapastic. Finally, don't forget to follow us here at Comikrew Studio.