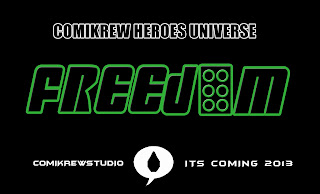 A pretty weird teaser today huh? Well then, time to put your guess at comment section !!

Comikrew Heroes Universe (CHU) is a new event presented by Comikrew Studio beginning this November. The story currently has begun with Prologue to The Spade and National Crisis The Beginning I will be coming soon. More comics will followed later until biggest event, National Crisis which is considered as the first arc of CHU next year.